There are very few pitchers that jumped up prospect lists last year than Joe Ryan.

Ryan was a ninth-round draft pick by the Rays in 2018. He spent most of his college career at Cal State Northridge where he moved between the bullpen and starter role and pitched well before shoulder and lat injuries killed his 2017 campaign. He transferred to Cal State Stanislaus where he absolutely dominated in his senior year. He went 8-1 with 127 strikeouts, eight walks, and a 1.65 ERA. He also brought a new delivery. Check out the two GIFs below. The first one taken during his sophomore year and the next one is from this season in Double-A

Since being drafted, Ryan has been a fast mover which is not common within the Rays organization. He started the season in Low-A where he destroyed the competition. In 27.2 innings, Ryan struck out 47 batters, while walking eleven and finished with a 2.93 ERA and 1.08 WHIP. He was then promoted to HIgh-A, where he spent most of his season, and struck out another 112 batters, while only walking twelve and finished with a 1.42 ERA and 0.71 WHIP. He finished the year in Double-A where in his three starts, he struck out 24, walked four, and finished with a 3.38 ERA and 1.13 WHIP. If we dig a bit deeper on his Double-A numbers, we see that is was just one bad game where he gave up three earned runs and only struck out four batters in his four-inning debut with Montgomery. His next two starts were more in line with his previous level of production wherein 9.1 innings he struck out 18 batters, with four walks, and a 1.93 ERA.

Looking at the surface, Ryan does not have overpowering stuff. His fastball sits in the low nineties, a slider in the mid-eighties, and a distinct cutter that hovers around ninety. He has an old-school delivery with a three quarters arm slot that hides the ball extremely well. He also pounds the strike zone with fastballs that batters simply cannot hit. Another feather in Ryan’s cap is that he has elite command and control of all of his pitches. It will be interesting to see how Ryan does in the higher levels of the minor leagues. When I say he is predominantly a one-pitch pitcher, I not joking. He used the fastball 73% of the time, which is not sustainable for a starter in the major leagues. If he can start incorporating other pitches while maintaining the strikeouts would be an excellent number three starter. I feel confident that Ryan can make that adjustment. Not only is he with a team that is one of the best when it comes to pitcher development but he has already made a drastic change in his mechanics to tap into his talent. If Joe Ryan is available, you should snag him before the price gets too high. 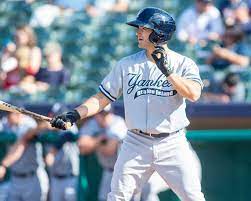