Guys on the Rise – Jhoan Duran

There was a time when Brad Radke was the ‘ace’ of the Twins but it is impressive how improved the pitching development for the Twins in recent years. They were once all in on low strikeout, groundball type pitchers that quickly went out of vogue in the league. Wes Johnson and his staff are using some of the highest pitching technology, like Rapsodo, Newtforce ground plates, and Simi Motion cameras, so coaches and players alike can dig into data on every pitch and pitch motion.  Now they have a big-league bullpen, thanks to the improvement of Taylor Rogers, Tyler Duffey, and Trevor May. Devin Smeltzer and Randy Dobnak, who seemed like they would not reach the majors, become legit back-end starters. They also used their prospect depth, in Brustar Graterol, to acquire Kenta Maeda who should help the team compete not only for the division but also for the American League pennant. The next prospect on the rise in their system that you need to keep your eyes on is Jhoan Duran.

Jhoan Duran was signed by the Arizona Diamondbacks in early 2015 for a $65,000 signing bonus and spent his first professional season in the DSL. As a 17-year-old, he threw 63.2 innings with a 3.25 ERA, 1.32 WHIP, and impressive 27.7 SwStk%. He came to the states in 2015 and unfortunately struggled during his time in the AZL. Even though he struggled from a numbers perspective scouts were impressed with his fastball and a projectable frame. He, and two other prospects, were acquired by the Twins in 2018 when the Diamondbacks traded for Eduardo Escobar.

Duran’s velocity has continued to increase the further along he has gone and how much he has added to his 6’5″ frame. During his first couple of seasons with the Diamondbacks, he was sitting in the low to mid-nineties range. Now, four-seam fastball sits in the upper-nineties and has touched 100 MPH at times. He also throws a nasty sinker in the low-nineties that drops hard out of the zone causing batters to swing-and-miss consistently. Look what he does to Vidal Brujan here for strike three.

He is also tinkering with a hard curve, that drops off the table, and sits in the mid-eighties. The Twins also worked on his delivery, moving him from an east-west to more of a north-south pitch which should help him once he reaches the majors.

Duran put up impressive strikeout numbers last year between Advanced-A and Double-A. In 78 innings in Advanced-A he stuck out 95 batters, had a 29.9 SwStk% to go with a 52.4 GB%. Keep in mind that a league-average GB% is 43.4% for the Florida State League which is pretty impressive for a 21-year-old. Duran’s biggest issue for most of his professional career has been his command. His walk percentage dropped from 9.8% in Advanced-A to 5.9% in Double-A and hopefully, it shows some development in that area and not just small sample size noise.

If the changes Duran has made is legit and the Twins want to be very aggressive, we could see Duran towards the end of the season, especially in a bullpen role. Keep in my I’m thinking from a full MLB standpoint here. I find it easier to convey how close someone is to the making the majors from a full season perspective, especially when no one knows what the season will look like, even if we have a season. Either way, Jhoan Duran is someone that needs to be roster in most dynasty leagues and hopefully, he finds his way onto your roster. 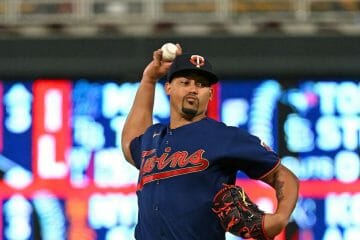 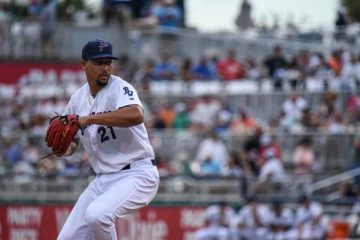 Guys on the Rise – Jhoan Duran