This article features a list of the top 75 starting pitching prospects by peak true-talent ERA (an average of xFIP and kwERA). It leverages Clay Davenport’s excellent minor-league translations work; translations can be found for every minor leaguer at claydavenport.com. Seriously, if you don’t have it bookmarked, please stop what you’re doing and make amends.

On a related note, Six Man Rotation has recently released “Sparkman” starting pitching prospect projections. If you haven’t seen them, I encourage you to check them out. It’s awesome work, leveraging logistic regression, a different methodology than what I use here. I think it’s worthwhile to compare the two lists. Spoiler: prepare to feel even more emboldened about Simeon Woods-Richardson.

My projections only capture minor league performance in the full-season leagues. They ignore everything else, e.g., scouting, velocity, frame, delivery, height, pitch mix, pitch usage, etc. I do not suggest you ignore these things and draft Bailey Ober as your SP1 (though you should draft him eventually at his current market rate!). ‘Peak true-talent ERA’ is a function of peak projections for strikeouts per nine, walks per nine, and ground ball percentage—the same components captured in xFIP (yes, I know K% and BB% are better metrics but the data was not readily available). The projections weight the three most recent years of data, a 3/1.5/1 weighting for 2019/2018/2017. They also add 50 innings of regression to the mean for strikeouts and ground balls, and 150 innings for walks—in each case to increase predictive accuracy. The projections are built from a sample of 735 rookie pitchers who had their MLB debut sometime in 2010-2019. Within this time frame, every pitcher with at least 50 innings in his MLB debut and at least 50 minor league innings in his projection was included. Predictive accuracy, or mean absolute error, for each projection is shown below. For example, the mean absolute error for the K/9 projection is 15% (or 1.33 K/9 in the 2019 MLB context, when league average K/9 was 8.88). Predictive accuracy was substantively the same when projecting MLB K/9, BB/9, and ground balls with MLB data in the prior year rather than with minor league data. This suggests there is no meaningful difference in predictive validity between minor league data and major league data (Clay Davenport has found similar in his own work from awhile back at Baseball Prospectus).

Note GBO stands for ground ball out percentage, taken from claydavenport.com; for pitchers with at least 10 innings pitched, GBO has a .96 correlation with the more pervasive ground ball percentage

Before considering the top 75 prospects for 2020, it’s enlightening to first consider history. The best pitching prospects from 2010 to 2019 are displayed below, following the same methodology used for the 2020 list. They’re ranked by true-talent ERA an average of peak kwERA and xFIP–detailed more in the next paragraph. All statistics displayed are peak projections scaled to the 2019 MLB context (4.50 league average ERA), e.g. in 2011 Matt Moore had a peak strikeout projection of 13.34 per nine innings. Note: to be ranked a player needed a minimum of 90 innings pitched in their projection. 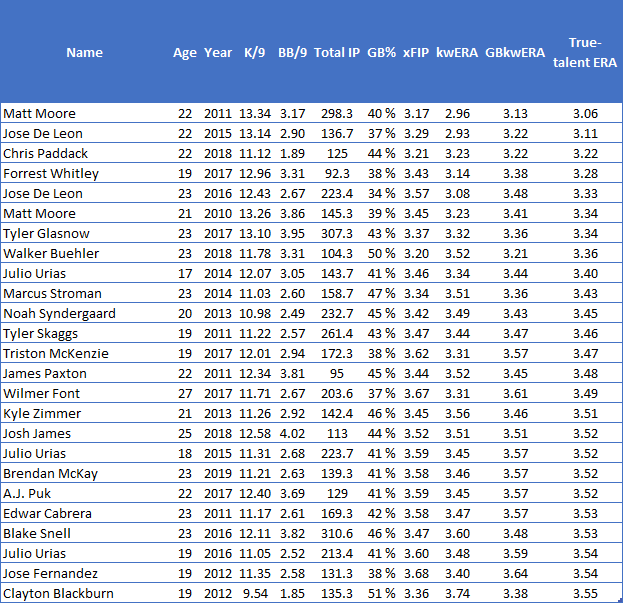 Onwards, the 2020 list is below, from #1 to #75. Anyone with less than 90 innings from 2017-2019 is excluded. Relievers are also excluded. Every column displays a peak projection except for the (peak) MLE (major league equivalency) columns. MLE columns show peak major-league equivalent statistics for 2019 minor league performance (scaled to the 2019 MLB context, league-average 4.5 ERA, 8.88 K/9 3.29 BB/9). These MLEs can be found for every minor leaguer at claydavenport.com. kwERA is an ERA estimator that only captures strikeouts and walks. GBkwERA is similar to SIERA (and also highly predictive), an ERA estimator that captures strikeouts, walks, and a nonlinear (quadratic) function of ground ball percentage. Read about these two estimators in Jeff Zimmerman’s piece here. You already know what xFIP is. True-talent ERA is simply an average of xFIP and kwERA. It’s reasonable to rank based on any of these estimators; I simply opted for my personal preference in averaging xFIP and kwERA. In the future, I could validate the different ERA estimators on MLB data and see which does best. For now, I’m content with relying on the validated K/9, BB/9, and ground ball rate projections to derive the various estimators.