What if we actually took the time to understand Tim Anderson’s 2019 season rather than making wild assumptions based on a single number? Perhaps we could see what underlying skills may have changed or improved. This would still allow us to understand which ones were lucky. After all, the mix of ground balls, liners, fly balls, spray angles around the field, running speed and exit velocities on each type of batted ball all impact BABIP.

Over the past three seasons, your BABIP leaders are (courtesy of the Fangraphs leaderboards):

These players all got to the top of the leaderboard in different ways. Judge hits everything hard and is a 24% line-drive hitter. Yelich also hits the ball exceptionally hard, has high sprint speed, hits a lot of balls back up the middle and hits from the left side of the plate. Domingo Santana is a 26% line-drive hitter, which is a 95th percentile performance over the past three seasons. Chris Taylor is great at hitting line drives as well as hitting the ball back up the middle in the air just soft enough to continually land in front of the centerfielder.

What do we know about Tim Anderson? What fueled the dreaded .399? Here’s a breakdown of what Tim Anderson did in 2019 versus the MLB average BABIP for each batted ball type to each field.

At the detailed level, Tim Anderson started hitting the ball much harder on balls that have a chance to get through the infield (non-choppers). His exit velocity was up 10mph on these batted balls. Continuing up the launch angle spectrum, Anderson added meaningful exit velocity to his line drives and fliners. This is where a large portion of his BABIP over-performance in 2019 was created. Let’s take a look at it in a visual way so we can understand.

Where Has Anderson Hit The Ball?

In 2019, Anderson had four doubles and single right down the left-field line. Those hits padded his pull field BABIP. However, it did help that he was hitting the ball 50-60 feet farther while generating higher launch angles on these batted balls. Rather than just getting the hits that fell in front of the left fielder, he was able to generate more gappers seen on the other side of the left fielder. There is some sustainability to his gappers if he maintains his exit velocity gains from 2019. For comparison, Aaron Judge has put up an .880+ BABIP the past three seasons on these types of batted balls, however he hits the ball even harder than Anderson. From these batted balls I believe we should see a loss of ~4 hits for Anderson next year. 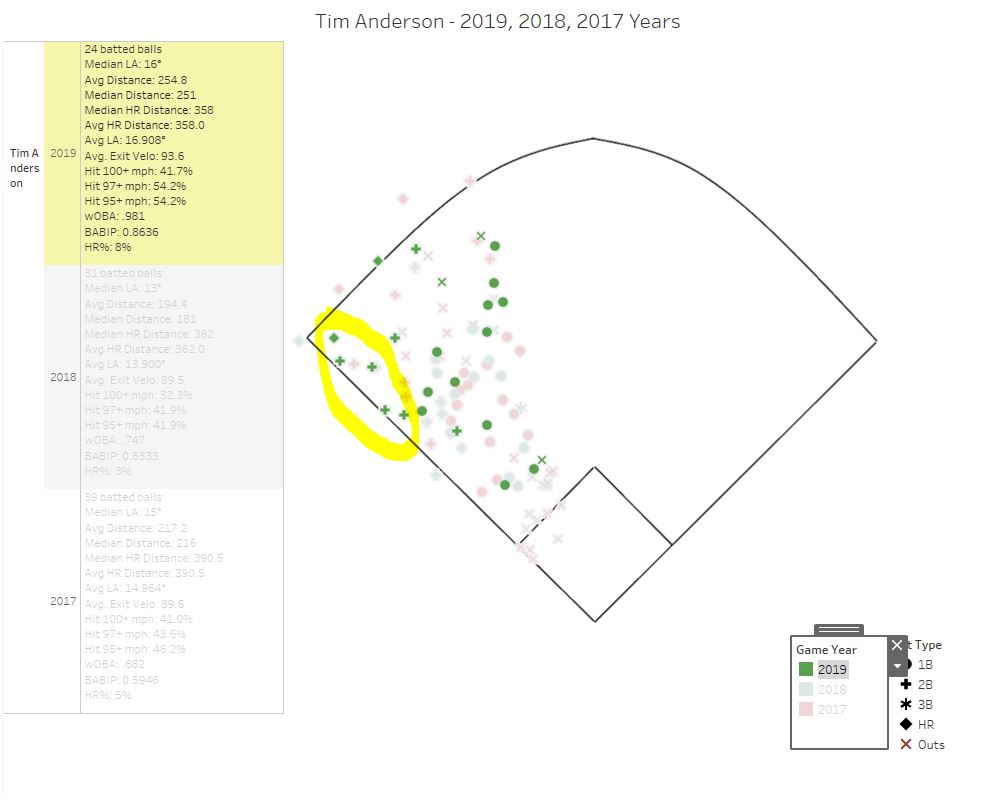 The next place Anderson over-performed on BABIP is the next higher set of launch angles. These launch angles are mostly reserved for out-of-play hits (homers), but softly hit flares (60-65mph) and harder hit balls to the opposite field can also fall in as hits. Again, I believe we should see a loss of ~4 hits for Anderson next year from these batted ball types. 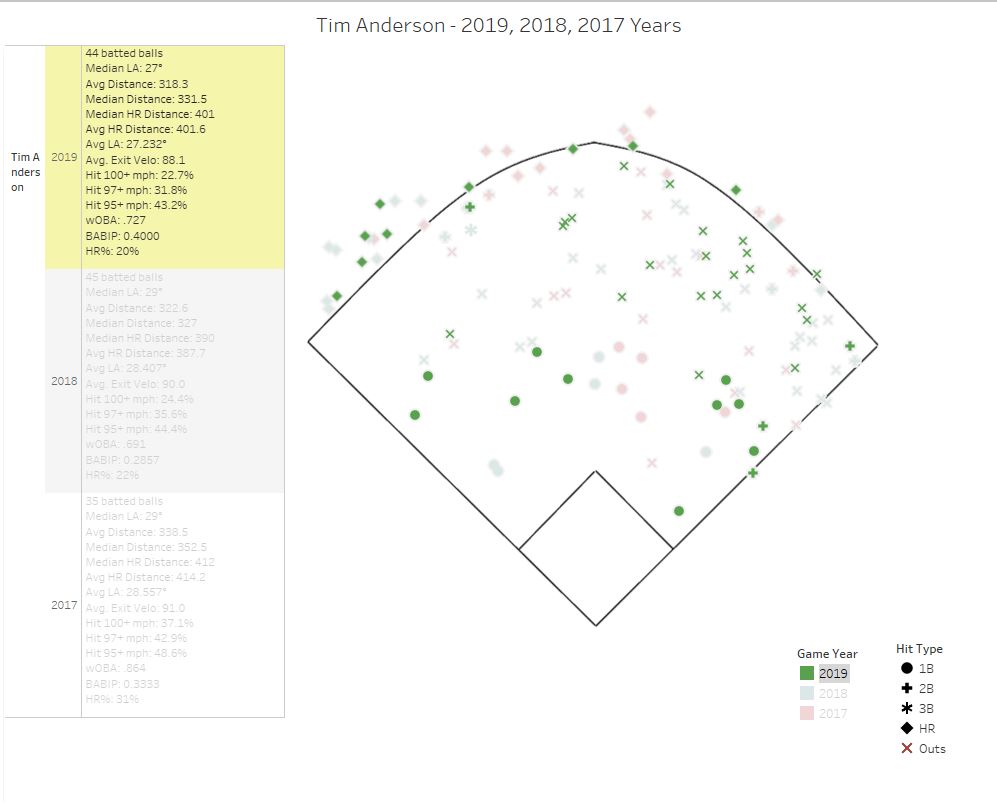 In totality, Anderson gained 15-20 hits from improvements and another 15-20 due to batted ball luck. To predict his new steady-state BABIP we should factor in the gains he made in exit velocity and spray distribution to each field, but remove the luck factors. Given these assumptions, Tim Anderson would post a BABIP between .345 and .355 which is still good enough to make a push for the top-5 on the leaderboard.

Steamer has not awarded Anderson any of these gains and projects a batting average of .275 with a .325 BABIP. I’d push those closer to .300 and .345 respectively. Prior to factoring in any gains from the White Sox 2020 lineup, along with any gains from playing more than 123 games, this would drop Anderson’s projected Runs scored output to ~71 and RBI to ~49 in the 2019 season.

If you’re interested you can find an assortment of batted ball and other statcast data tools on my Tableau Public profile.