At the beginning of August, TDG reviewed July performances for infielders, outfielders, and pitchers. Since then, several notable prospects exceeded rookie limits and others arrived in the majors. As this update only reviews performances for one month, please note this bright, flashing warning: SMALL SAMPLE SIZE!

Before delving into prospect performances, I want to emphasis taking performances within league context. For example, the Pacific Coast League has 11 of 16 teams with an OPS of .800+ and a league average slash of .277/.354/.477! Indeed, El Paso hit .302/.370/.537 as a team! Jorge Mateo (.289/.330/.504, 96 wRC+) performed below league average. The difference between the Pacific Coast League and the Florida State League in league OPS is 165 points. The following table shows league OPS through September 2nd.

Julio Rodriguez, Seattle Mariners. Welcome to the hitter-friendly CAL, JRod! In his first 17 games, he went 30-for-65 with 11 extra base hits (.462/.514/.738). This performance came on the heels of a strong 15-game finish in the MID as well (.364/.403/.667). To top it off, Rodriguez will participate in the Arizona Fall League at 18 years old. The scary thing is this may just be the tip of his upside. Given his youth, he can struggle with swing-and-miss at times (15.2% SwStr) and be overly aggressive. Further, Rodriguez has not yet truly tapped into his double-plus raw power, favoring a more level, line drive stroke. With precocious hitting ability and the aforementioned power, he possesses as much upside as any prospect, and already draws comparisons to Eloy Jimenez. A strong performance in the AFL will further elevate Rodriguez, who is already a top 10 dynasty prospect.

Dylan Carlson, St. Louis Cardinals. Welcome to the extremely hitter-friendly PCL, Dylan! Over his first 18 games, he already launched 5 home runs (.361/.418/.681). In addition, Carlson joined the 20/20 club (26/20) with 2 stolen bases in his final 3 games. While he possesses plus power, he only is an average runner, and anything more than low double-digit stolen bases is not something to expect long-term. Still, he exhibits a disciplined approach with reasonable swing-and-miss and above-to-plus power from both sides of the plate. Further, it is reasonable to project on his hitting ability as a switch-hitter refining two different swings and still just 20 years old. All told, Carlson has the makings of an above-average hit tool with plus raw power who can maybe chip in some stolen bases due to his aggressive baserunning.

Our first #DylanDinger!@DCarls_06 leads off B1 with a ? to straightaway center field!

Aristides Aquino, Cincinnati Reds. The trade of Yasiel Puig created an opportunity for Aquino, and he ran with it. Over his first 32 games, he blasted 15 home runs! Double-plus raw power has always been his calling card, but he did not fully tap into it until this year. A change to his batting stance has lead to newfound success. With that said, Aquino still suffers substantial swing-and-miss (17% SwStr in INT, 18.5% SwStr in MLB). Further, he utilizes one of the most swing-happy (57% swing!) approaches in the majors. As such, he almost certainly will regress, and it would not be surprising if his batting average flirted with the Mendoza Line. In early mock drafts, however, industry writers are drafting Aquino as high as the 6th round in 15-team redraft leagues. Long-term, you should expect inconsistent .230/30+ type production, similar to former Reds slugger Adam Duvall.

Aristides Aquino crushed his 14th roundtripper since his Aug. 1 promotion last night. That ties a franchise record for home runs in a month with three games still to play! ?

Adam Haseley, Philadelphia Phillies. The eighth pick in the 2017 draft, Haseley has enjoyed a respectable debut (.265/.320/.401, 86 wRC+, 0.7 WAR). In the field, he has been a reliable defender across all three outfield positions. Meanwhile, he has flashed above-average raw power, speed, and hitting ability. However, Haseley has not exhibited the same advanced plate discipline he had in the minors. In addition, he has hit far too many ground balls (55%), made too little hard contact (26.5%), and suffered elevated swing-and-miss (14% SwStr). Regardless, there is a lot to like here, with sneak .280/15/15 (or better) upside if he can put more balls in the air.

The kid is alright. #RingTheBell pic.twitter.com/J0tGlmXPW6

Travis Demeritte, Detroit Tigers. The strikeouts have caught up to Demeritte, with 21 in his last 45 plate appearances (46.7%). If he can make enough contact, he has the power (plus) and even the speed (surprisingly, above-average!) to make a lot of noise.

Kyle Tucker, Houston Astros. The long wait for Tucker is finally over. Prior to his promotion, he put the finishing touches on a 34/30 campaign in the PCL with a strong August (.293/.387/.556, 7 HR, 7 SB). Since his arrival, he has played in all 9 games, but only received 3 starts. Tucker has made the most of his limited playing time, going 7-for-25 with his first career home run and a stolen base (.280/.308/.520). Notably, he has show average-to-above speed, which provides some reason to believe in stolen base contributions long-term. Hopefully, he can impress enough to earn a regular role heading into 2020.

After blasting a career-high 34 homers this year in #MiLB, Kyle Tucker hit his first #MLB homer tonight for the #Astros. pic.twitter.com/312aP1SHA0

Trent Grisham, Milwaukee Brewers. Grisham’s midseason power surge since late May has carried over to the majors, where he already has 5 home runs (.260/.319/.471). In addition, he has shown plus speed despite no stolen base attempts. While he is drawing few walks, Grisham remains very patient (4.15 pitches/plate appearance and 40.5% swing) with reasonable swing-and-miss (8.5%). Most importantly, he is the leadoff hitter for the Brewers. Small sample size notwithstanding, Grisham has the look of a potential high on-base, 20/20 bat with plenty of runs.

Josh Rojas, Arizona Diamondbacks. The Cinderella prospect story of the 2019 season, Rojas has continued to impress in his new organization. Since being acquired from the Astros, he destroyed the PCL (.514/.575/.943) and earned a promotion to the majors. During his debut, Rojas has flashed above-average raw power with plenty of hard contact (43.6%), average-to-above speed, and a patient approach. A utility fielder in the minors, he has mostly played left and right field, where he has showed well. The Diamondbacks will provide him a long look in September. If Rojas enters 2020 with a starting spot, he is a great sleeper pick in all formats.

Jarred Kelenic, Seattle Mariners. The sixth pick in the 2018 draft, Kelenic has soared through, and excelled at, three levels in minors this year. This past month, he combined to hit .316/.360/.579 with 7 home runs between the CAL and the TEX. All his offensive tools sit comfortable above-average, and his highly-regarded work ethic and advanced baseball IQ maximize each. The only true blemishes on his performance have been some swing-and-miss (12% SwStr), a pull-heavy approach (49.3%), and mostly pull-only home run power (below). 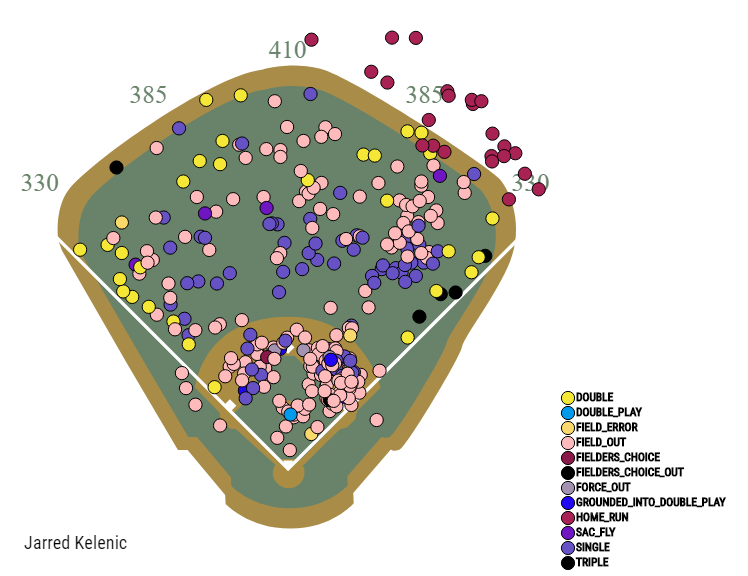 Corbin Carroll, Arizona Diamondbacks. Carroll’s double-plus speed has been on full display in his debut. Indeed, he has totaled 7 triples and 18 stolen bases (on 19 attempts) between the AZL and the NWL, including 4 triples in 11 games in the NWL (.326/.408/.581). While he lacks a ton of raw power, Carroll more than makes up for it with a potential plus hit tool and the aforementioned elite speed.

Luis Matos, San Francisco Giants. Part of the Giants’ stacked 2018 international class, Matos has nearly matched the performance of class member Marco Luciano. At just 17 years old, he lit up the DSL (.362/.430/.570, 7 HR, 20 SB) and earned a late season stateside promotion to the AZL (7-for-16). Matos possesses immense five-category upside with potential plus raw power and plus speed. Of course, he carries tons of risk, with a presently pull-heavy and aggressive approach, which may be troublesome as he advances through the minors. 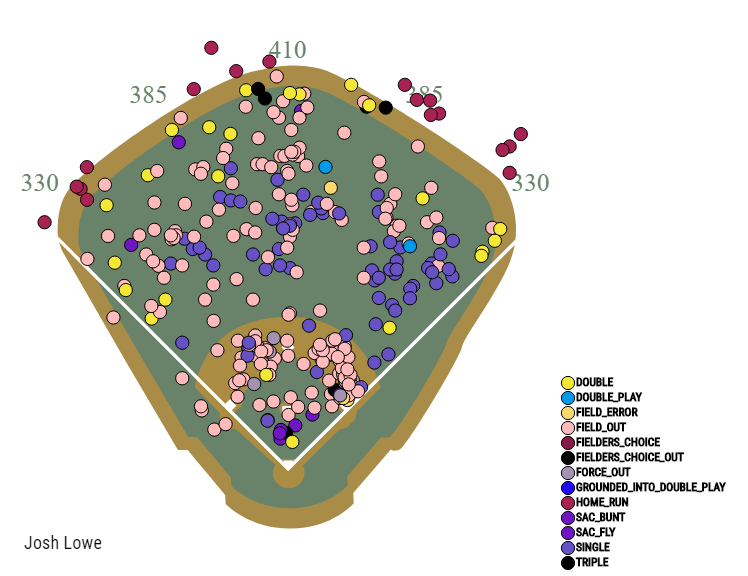 Gilberto Celestino, Minnesota Twins. The Twins acquired Celestino from the Astros for Ryan Pressly last year, and he struggled for nearly a full year with his new organization. Not until late June did he truly take off. Since then, he has hit .352/.411/.540 with 6 home runs and 5 stolen bases over his last 54 games. Thin and narrow-shouldered, Celestino lacks anything more than below-average power, but enough to muster double-digit home runs. On the other hand, he has plus speed and a promising hit tool.

Jo Adell, Los Angeles Angels. Most expected a powerful showing in the hitter-friendly PCL from Adell. However, he failed to hit a single home run in 27 games. Meanwhile, he suffered significant swing-and-miss (32.6% K, 19% SwStr). Adell’s power and speed upside is undeniable, but his hit tool still needs a lot of work.

Bubba Thompson, Texas Rangers. Injuries have sunk Thompson’s season. When he has been on the field, he has flashed his double-plus speed and average raw power. At the same time, however, Thompson struggled with contact all year (31.6% K, 18% SwStr).