Seth Corry sports a distinct, three-pitch repertoire, delivered from a three-quarters arm slot. Previously, Seth Corry utilized a semi-windup delivery, with a small step sideways before his delivery. Now, he exclusively uses no windup, throwing from the stretch with a leg-lift to load up before his delivery. This simplified, repeatable delivery likely is responsible for his improved control over the past two months. However, Corry still has a short, often closed, stride, which can cause shaky command on pitches down in the zone, especially away from his arm side.

Corry chiefly relied on a fastball (69%) with late, armside run. In this outing, his velocity ranged from 90-94 mph, but he mostly sat between 92-93 mph, averaging 92.3 mph. Corry generally exhibited solid command of his fastball, with the ability to locate to both sides of the plate. As he firms up and fills out his frame, he likely more regularly sits 93-94 mph. In the first clip, he delivered a 94 mph fastball to Fabricio Macias. In the second clip, he caught Jack Herman looking at a well-located 93 mph fastball. The remaining clips include four whiffs on his fastball. Grade: 45 present, 55 future

Corry has made substantial progress with his change-up, and he elicited at least 8 whiffs on the pitch. In this outing, his change-up ranged from 82-85 mph, averaging 83.4 mph. The pitch averages 9 mph velocity separation from his fastball with deceptive arm speed and solid diving action. Corry heavily relied on his change-up as his primary off-speed offering (22%). Arguably, it is now his best pitch, and the clips below show six whiffs. Grade: 50 present, 60 future

During the 2017 draft, Corry was known as a fastball/curveball raw projection arm. While his change-up has surpassed his curveball, his curve is still a potentially effective pitch. In this outing, his curveball ranged from 78-80 mph, averaging 78.9 mph, eliciting several whiffs (below). Corry struggled commanding the pitch, often spiking it or failing to get on top of it. Further, his curveball was clearly his third offering (9%). However, his curveball flashed some sharp, 11-to-5 movement, causing some awkward swings. Grade: 40 present, 50 future

Seth Corry is one of the hottest pitching prospects in the minors. His fastball/change-up combination confounds Low-A hitters, and he has made notable strides with his command. Further, his frame, solid athleticism, and simple delivery portend durability, stamina, and future average command. Already, Corry flashes three potential big league quality offerings, all of which could develop into above-average pitches. As such, Corry profiles as a potential mid-rotation starter, but with some relief risk without further command gains. 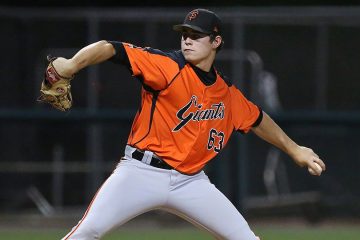