At the beginning of June, TDG reviewed May performances for infielders, outfielders, and pitchers. Since then, several notable prospects exceeded rookie limits and others arrived in the majors. As this update only reviews performances for one month, please note this bright, flashing warning: SMALL SAMPLE SIZE!

Brennen Davis, Chicago Cubs. A second round pick in the 2018 draft, Davis possesses potential elite tools with plus speed and burgeoning power. Given his large, undeveloped 6’4″ frame, he projects to develop significant raw power. Initially, the Cubs had 19-year-old Davis ticketed for short season ball this year, but impressive development in extended spring training forced an assignment to Low-A in late May. Specifically, a revamped swing along with strong plate discipline (23-to-16 strikeout-to-walk ratio) have lead to a fast start in the Midwest League (.314/.419/.495). In addition to his tools, he also receives high marks for his work ethic. With an improved hit tool to go with his 20/20 upside, Davis is a potential fantasy star.

Trent Grisham, Milwaukee Brewers. The fifteenth overall pick in the 2015 draft, Grisham (formerly, Clark) was a well-regarded hitter, and he even enjoyed a strong debut (.309/.424/.430). Unfortunately, over the next three years, he failed to delivery on his promising bat, hitting just .228/.347/.344 over 1,236 plate appearances. During that time, he did continue to draw tons of walks (16%) and he remained above league-average each year. This year, Grisham has finally discovered his power stroke, launching 17 home runs, nearly eclipsing his career total (19). In June, he hit 10 of those home runs between Double-A and Triple-A (.286/.436/.702). Meanwhile, he is still walking up a storm (15.1%) with some speed (7 SB). Although it is difficult to read too much into this small sample of success, Grisham is looking more like a legit prospect with average tools across the board.

Trent Grisham continues to produce
for the @BiloxiShuckers going 5-for-7 with 2 homers, 3 doubles and 4 walks so far this weekend. pic.twitter.com/KNNdRhoVaB

Oscar Mercado, Cleveland Indians. The Indians acquired Mercado from the Cardinals at the trade deadline last year. A mediocre and powerless performance following the trade (93 wRC+) likely delayed his arrival this year. Meanwhile, the Indians attempted (and failed) to put together a patch work outfield. Following a strong start in Triple-A (.294/.396/.496), Mercado earned a promotion and ran with it (literally). Over his first 39 games, he has hit for some power (4 HR, .163 ISO) and flashed his plus speed (6 SB). Despite his success (.314/.360/.477), he is enjoying some luck on balls in play (.370 BABIP, .268 xBA, .398 xSLG), and he only possesses borderline-average raw power. However, Mercado still should hold nice value even with regression as a .270-.280 hitter with double-digit home run pop and 20+ stolen base speed.

This is Oscar Mercado.
Oscar is a Rookie of Year candidate.
This is his campaign.#RallyTogether pic.twitter.com/jCSOZjycgL

Harold Ramirez, Miami Marlins. Last November, Ramirez elected free agency after spending three straight years in status quo in Double-A with the Blue Jays. In most cases, he is an organizational depth piece, but, with the Marlins, he has worked his way into a regular role (.307/.343/.399). Thus far, he has hit nearly everything on the ground (62%) with a 1.6° launch angle. While he has modest raw pop, he has even less game power given his approach. A corner-only profile without power is a difficult sell, even with some speed.

Yordan Alvarez, Houston Astros. The long-awaited promotion of Alvarez finally happened in early June, and he has seamlessly transitioned to the majors (.317/.406/.733, 7 HR). Given his performance, it is unsurprising he has made tons of hard contact (50%). Most impressively, Alvarez has displayed superb patience (13% walks) and reasonable swing-and-miss (23.2% strikeouts and 10.7% swinging strikes). Already, he is flashing an above-average hit tool with double-plus raw power. Although he is a well below-average runner with little range, he will remain a lineup fixture, which is all that matters in fantasy.

He's done it again!#Astros No. 3 prospect Yordan Alvarez launches a 2-run ? — his 7th HR in 12 #MLB games — to extend the @Astros' lead over the Yankees. pic.twitter.com/iFZCUllFtP

Josh Naylor, San Diego Padres. Initially, most expected Naylor’s promotion to be short-lived, but he has stuck in the majors for over a month. With Hunter Renfroe and Franmil Reyes receiving the majority of playing time in the corners, Naylor has served as a part-time, bench bat. This role is not ideal for his fantasy outlook or in real-life as he provides no defensive value. Indeed, he has accumulated -0.5 WAR. At the plate, he has made little hard contact (29%), and too much low contact (3.1° launch angle). This is an ongoing concern for Naylor as he consistently fails to tap into his huge raw power.

Jo Adell, Los Angeles Angels. Injuries to his hamstring and ankle delayed his season until late May. Since his return, Adell has dominated, hitting .392/.458/.635 with 3 home runs and 4 stolen bases in Double-A this month. This performance is in stark contrast with his first foray into the Southern League last year. In particular, Adell has suffered far less swing-and-miss, including 15% less strikeouts and 8% less swinging strikes. While this is a small sample size, it is still extremely promising. His power and speed are unquestionable and, if he has begun to resolve his swing-and-miss issues, Adell is one step closer to stardom.

Drew Waters, Atlanta Braves. Along with teammate Cristian Pache, Waters has had his way with the Southern League at just 20 years old (.324/.367/.506). This past month, he knocked 16 extra base hits in just 27 games (.370/.417/.600). Despite his success, however, he has benefited from the best batting average on balls in play among qualified minor league hitters (.452). In addition, Waters suffers plenty of swing-and-miss (28% strikeouts and 17.3% swinging strikes), and he has a notable platoon split against left-handed pitching despite being a switch-hitter. All told, Waters is still a stud, but there are some concerning aspects to his performance which warrant skepticism.

Brent Rooker, Minnesota Twins. Before slugging corner outfielders Trevor Larnach (2018 1st) and Matt Wallner (2019 CBA), the Twins selected Rooker in the 2017 draft. Last year, he was the only member of his draft class to begin the season in Double-A. While he struggled at times, he still flashed his huge power. This year, Rooker moved to Triple-A and, although he hit for power, he otherwise struggled through May (.222/.278/.478, 43-to-6 strikeout-to-walk ratio). After a stint on the injured list, he returned with a vengeance in June (.337/.507/.612 with 27 walks). Now, Rooker is on the cusp of the majors and profiles as a three-true-outcome slugger with mammoth power.

Randy Arozarena, St. Louis Cardinals. While Harrison Bader was terrible in June (.155/.274/.324, 58 wRC+!), Arozarena was spectacular (.374/.452/.607). In fact, he has played center field exclusively since arriving in Triple-A mid-month (hint, hint). If not for a fractured hand suffered in spring training, he may already have received a promotion. If you are looking for the next Oscar Mercado, look no further. Arozarena is an average-to-above hitter with reasonable swing-and-miss, sneaky average raw power, and above-average speed. With that said, he is no Bader in the field and it is unclear whether the Cardinals are willing to take a defensive hit to add his offense.

His HR came on a 1-0 count. He took a lousy breaking pitch then hit the fastball on a line to the opposite field. Here's the at-bat: pic.twitter.com/7am5nZuzDF

Yonathan Daza, Colorado Rockies. Entering June, Daza was enjoying an excellent campaign in Triple-A (.366/.403/.576). Incredibly, he was even better this past month (.402/.455/.607). There is only so much you can discount his performance due to the hitter-friendly conditions of the Pacific Coast League. Further, Daza has all the traits of an above-to-plus hitter with an all-fields approach, reasonable swing-and-miss (12.7% K), and tons of hard contact (24.5% LD). In fact, Steamer projects him to hit .305/.338/.432 for the rest of the season! The issue is there is no room in the Rockies’ stacked outfield.

Jerar Encarnacion, Miami Marlins. A hulking 6’4″ slugger, Encarnacion is a raw hitter with understandably big power. This year, he made his full-season debut and enjoyed a fast start over his first 24 games (.368/.439/.600). Notably, he made substantial progress with his plate discipline, cutting his strikeout rate by 7% and upping his walk rate by 4%. In June, Encarnacion received a promotion to High-A Florida State League, where the cavernous parks have yet to hold his power (.340/.380/.617).

From today, Jerar Encarnacion lifts a fly ball out. But #Marlins fans pay attention to him. Big time power. Still raw but has a chance to be middle of order bat. @GoHammerheads He may not be in Jupiter very long. pic.twitter.com/EJq8HgnDR1 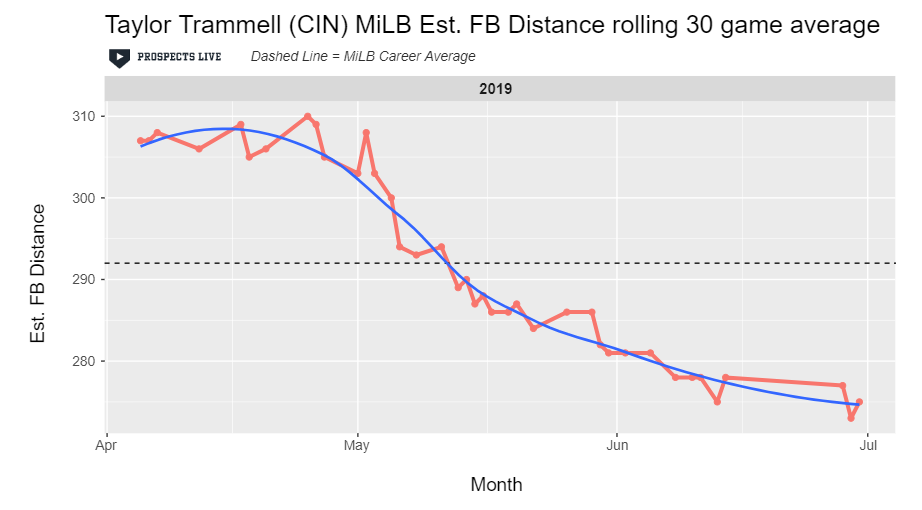