Streaming starting pitchers and decided on what lineups to target can make or break your matchup, and even season. Knowing teams platoon splits can help you choose lineups to avoid and the lineups to feast on. 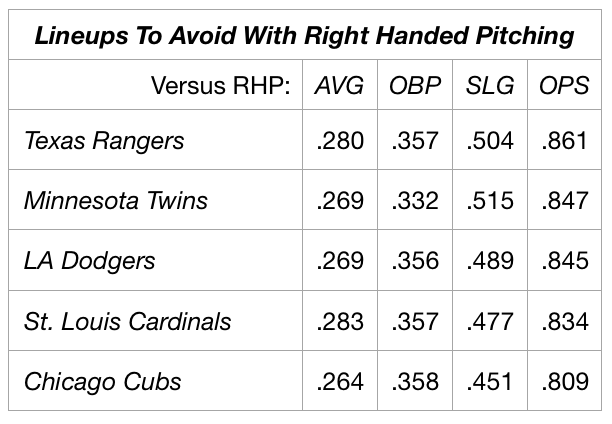 Logically, the league’s top offenses in 2019 sit atop the lineups to avoid against right-handed pitchers. The Rangers lead the way, as their .861 OPS against righties is .200 points better than their OPS versus left-handed pitchers. This platoon difference makes sense, with core hitting pieces such as Joey Gallo, Nomar Mazara, and Shin-Soo Choo all being more productive against RHP. The Dodgers, like the Rangers, should be avoided at all costs with right-handed starters, as their lineup is anchored by some of the best left-handed power hitters in all of baseball: Max Muncy, Joc Pederson, Corey Seager, and half-man, half-god, Cody Bellinger. 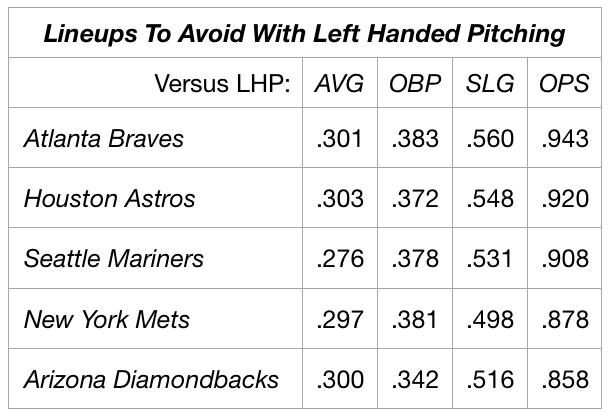 The lineups to avoid with left-handed starters naturally features lineups with some of the best right-handed hitters in baseball. Aside from lefty Freddie Freeman, the Braves are anchored by Josh Donaldson and Ronald Acuna, while the Astros feature righties Correa, Bregman, Altuve, and Springer. Seattle’s hot offensive start was largely carried by the performance of righties Domingo Santana, Mitch Haniger, Edwin Encarnacion, and Tim Beckham, and this has resulted in dominance against left-handed pitching. 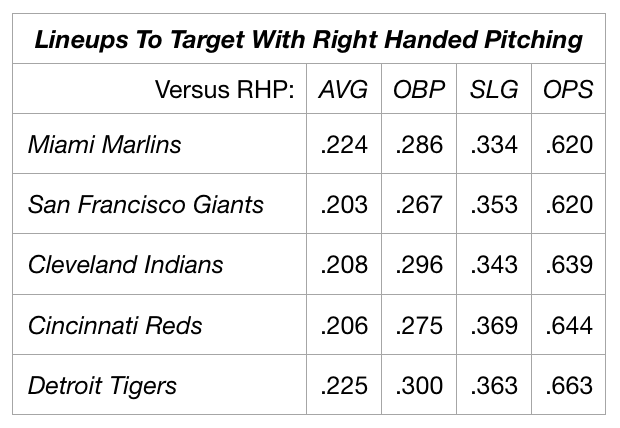 As expected, poor offensive teams, such as the Giants and Marlins, are easy targets for right-handed starters, but a team to note here is the Cincinnati Reds. While the Reds have a respectable .758 OPS against left-handed starters, their reliance on righties such as Puig and Suarez has seen their performance against the strong side of the platoon struggle. 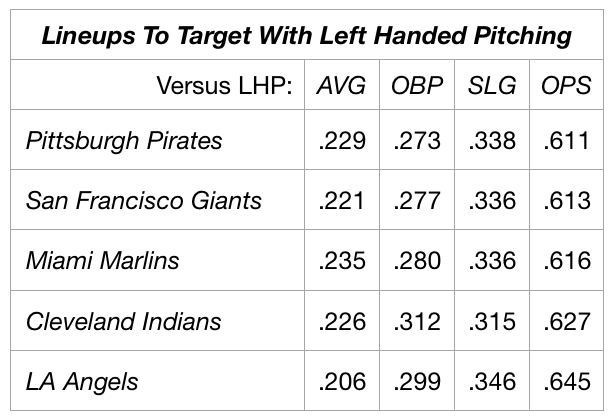 The Pittsburgh Pirates have the league’s second-fewest runs scored, in large part due to their inability to hit left-handed pitchers. The Bucs lineup features only two full-time right-handed hitters, Cervilli and Marte, but their switch hitters’ inability to hit southpaws is a large reason for their .611 OPS v LHP. Another team of note here is the LA Angels, who have posted one of the worst slash lines against lefties despite having the game’s best right-handed hitter.

It is easy enough to avoid the best offenses in baseball, and target the worst, but understanding the platoon outliers is important for streaming starters as well as daily fantasy. Teams like the Braves and Rangers, whose lineups show vast splits between success against lefties and righties, are important to note when picking your starters. As well, it is important to understand why these lineups have performed to this quality thus far in 2019. For example, note that the Indians struggles against all pitching can be attributed in part to Francisco Lindor’s early-season injury.