Part one of this series summarized a novel twist on the delta method to understand player aging, with estimated missing seasons to correct for selection bias. Part two presented the main findings of the delta method: players peak between 26 and 29; they experience substantial growth over their careers in all facets of the game, with peak performance 25% higher than age 19 performance for wOBA, and more than 100% higher for isolated power and walk rate.

Players who post a .308 wOBA (all statistics scaled to 2018) at 19 are not your everyday guys – only a very small group of players are good enough to accomplish this. Almost all of these players are stars at some point in their careers. They have a peak wOBA similar to the peak wOBA I have found using the delta method (raw results), which is around 25 percent higher than their age 19 wOBA. This growth rate includes careers ruined by injury. Nearly all the 19-year-old busts tend to have seen their careers wrecked by injury—think Tony Conigliaro (face) or Tony La Russa (shoulder).

The smoothed-over delta method curve crudely predicts 19-year-olds to reach a peak wOBA 27% higher than their rookie wOBA—a .392 peak wOBA. Players with a lower wOBA than .308 at 19 should see even bigger percentage improvements and players with a higher wOBA than .308 should see smaller improvements. The data shows it is easier to improve at lower performance levels than at higher performance levels.

One should not simply forecast, say, Juan Soto’s 19-year-old season with these aging curves—he is unlikely to improve as much as the average 19-year-old in the sample simply because he was so good right away. Multiply Soto’s rookie year by 27%, the average improvement for a 19-year-old with a .308 wOBA, and his peak wOBA would approach a Bonds-ian .500.  Soto may not reach a .500 wOBA, but he will likely follow general aging patterns anyway, even if his improvements are smaller. He does not need to grow by 27% percent to be one of the best players in the league—he already is. Even with small age-related growth, perhaps conservatively around 15 percent improvement, he will peak at .451 wOBA. That would have been the best in the league in 2018, slightly ahead of Trout and Betts.

To form a vague idea of how much Soto might grow throughout his career, I looked at the career growth of the best 19-year-olds since 1950 (minimum 300 plate appearances at age 19, minimum .330 wOBA). The results are below. 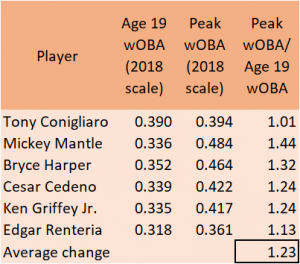 Even among this elite group, significantly better than the average 19-year-old, peak wOBA improved 23% over 19-year-old wOBA—including Tony Conigliaro’s career ruined by injury. A 23% improvement is slightly less than the delta method peak wOBA increase of 27% for an average 19-year-old. Nonetheless, 23% is still very substantial, and is in the same ballpark; the delta method passes this preliminary validation test. If Soto improves by 23% at his peak, he will put up a .482 wOBA (2018 scale). I think Soto has a best-in-the-league peak season in him. He is, of course, the greatest 19-year-old of all time, and other excellent 19-year-olds listed above (and pre-1950 Mel Ott), tended to improve a great deal even after very good 19-year-old seasons. Vladimir Guerrero Jr. had similar major league equivalent minor league stats (taken from claydavenport.com) to Soto at 19 and very likely would have been at least a league average hitter in 2018 had he been called up. I’d also expect him to grow into one of the best hitters in the league at his peak. There’s a reason most dynasty rankings have these two so high:  Bret Sayre (link) and Tom Trudeau (link) had them both in the top 10 overall players in their recently released top 500 dynasty rankings.

As a second simple validation check to get an idea of how the delta method compares to career growth for individuals, I looked at all 19-year-olds since 1950, minimum 50 plate appearances (to increase my sample), and followed them throughout their careers (this time excluding missing seasons). I have poorly named this approach, the “follow-the-player-throughout-their-career” method [I pushed for the Boyhood Method- Ed.]. Their average performance change from season to season is recorded.

Unlike in the delta method, this method excludes missing seasons. The sample accordingly decreases as players age and unlucky players drop out without a chance to positively regress. Aging growth is likely attenuated, and aging decline is likely amplified. It is a biased and messy method (there is a reason nobody really uses it).

I nonetheless hoped to see reasonably similar 19-year-old aging curves in the “follow-the-player-throughout-their-career” and delta methods. The new results are shown below, side-by-side with the original raw delta method results. Peak ages are in green. Most of the 55 19-year-olds in my sample are stars—find them in the appendix 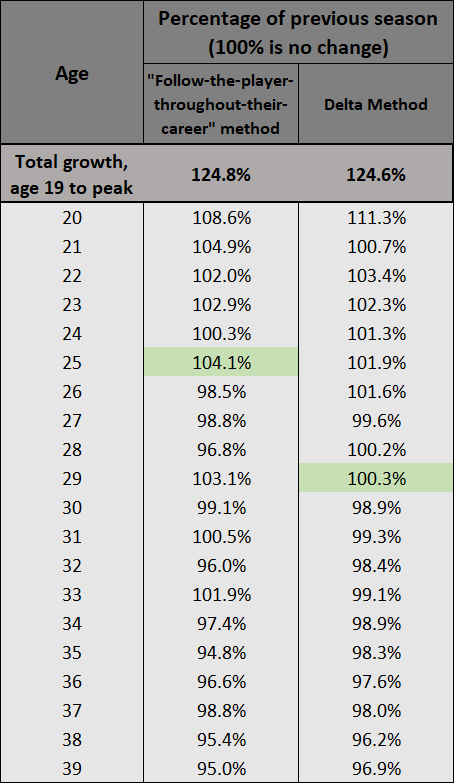 This group also rapidly ascended at younger ages, up until age 25. Reassuringly, 19-year-olds in this analysis improved at essentially the same rate as 19-year-olds in the delta method. Both groups saw 19-year-olds grow 25% at their peak over their debut wOBA.

The main difference between the two methods was in the new method, 19-year-olds peaked at 25 rather than 29. An early peak was expected because this sample was biased to peak earlier. It is not too major a difference because in the delta method players nearly reached their peak at 25—improvements between age 26 and 29 were gradual. In the new method, wOBA declines between 26 and 29 are very gradual—wOBA falls less than .010 points. Further, in conversations with aging curves guru Mitchel Lichtman, he convincingly argued 19-year-olds who play in the majors are likely more physically advanced than other 19-year-olds. Their “physical age” is older than 19, so they reach their peak faster (Lebron James is a good example of someone who was physically advanced at 19, and Soto is another).

Both methods share the common and more substantively important finding of rapid improvement between 19 and 25. The divergent results for different methods can likely be explained by a few things: the “follow-the-player-throughout-their-career” method has a much smaller sample at older ages (21 and above) and excludes missing player seasons, while the delta method has a much smaller sample at age 19 and 20, and forecasts missing player seasons. Including a larger sample of older players and forecasting missing player seasons in the new method would likely raise peak age and peak wOBA growth. This is because of selection bias: with forecasts for missing seasons, unlucky players would be given a chance to positively regress, increasing aging gains and reducing aging declines. Including more older players in the sample would also push the peak age up. Sample differences also explain the peak age differences, as 19-year-olds in the new sample are likely more physically advanced than the typical 19-year-old baseball player.

With a less biased method, the new results might converge toward the delta method results, perhaps with an even higher peak wOBA growth than the delta method found (since in the new method, overall growth from 19 to peak was 25% before the selection bias correction). This is speculation, however. The important thing is both methods find most improvements take place from age 19 to 25, and the magnitude of improvement is large. In both the delta method and the “follow-the-player-throughout-their-career” method, wOBA changes between age 25 and 29 are gradual.

With this knowledge in hand, I have started to come around on Luis Urias, finally understanding why he consistently ranks as a top 50 prospect overall. His power already took a major step forward in 2018 at age 21, with a .150+ isolated power at the major league level, and a .140+ isolated power in Triple-A. This is a huge improvement over 2017 and any year prior—his minor league isolated powers pre-2018 were always well below .100 using major league equivalencies. In further validation checks, similar 21-year-old isolated power performances in the past followed general aging curves pretty closely. If Urias does, he’ll reach a peak isolated power over .200. Other 21-year-olds will likely also see significant power growth. Ozzie Albies and Rafael Devers both had isolated power around .190 in 2018. I’d expect them to be among the league’s premier power hitters at their peaks. Few prospectors foresaw this sort of power output for Albies; I certainly did not. Power growth doesn’t seem obvious for players with weak minor league power output at very young ages– Urias, Andrus and Albies, to name just a few. Isolated power aging curves find substantial power growth at young ages is typical, the norm rather than the exception.

Next week, I’ll wrap up this series with post-2003 aging curves, and present them side-by-side with the 1985-2017 aging curves from part II. A few important differences emerge, but overall growth is comparable in both eras for each of the eight statistics–even though post-2003 sample sizes are much smaller. Peak age is also comparable, though slightly earlier. There remains a plateau between age 26 and 29 regardless of sample.

Thanks for sticking with me! 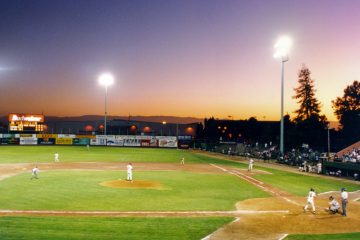 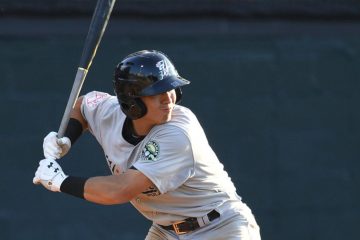