Howdy Y’all!! I hope that you’ve been following along with my Melicharting series, where I breakdown names at each position. But in moving to the outfielders I had to highlight one specific player. After listening to the December 5th podcast and hearing a call from resident prospect-guru Jesse Roche for an update to my early September article on How To Value Christian Yelich in 2019, I had to dedicate some more real estate to the slugger.

As was noted on the podcast, Christian Yelich is a very unique hitter. Not only because of his line drive to ground ball heavy approach, but also in how he uses the outfield for the balls he does elevate. Over the last four years here’s how Yelich has distributed his ideal launch angle flyballs.

Christian Yelich not only hits very few fly balls, he almost avoids pulling the ball in the air despite having equally elite quality of contact to all fields. Perhaps waiting a half tick longer on balls at the plate allows him to make more and better contact via his exceptional pitch recognition skills.

Last we checked in on Yelich, he already had 13 home runs to center field through the end of August. What happened in September is he literally barreled every fly ball he hit for the rest of the season. In September, Yelich hit 8 fly balls to centerfield at these premium launch angles, and as you may have guessed he homered on all 8, averaging 106 mph in exit velocity. He pulled another 4 balls to right field and homered on two of those, averaging 106 mph as well. Here is what his control charts looked like on balls hit 95+ mph in the air. 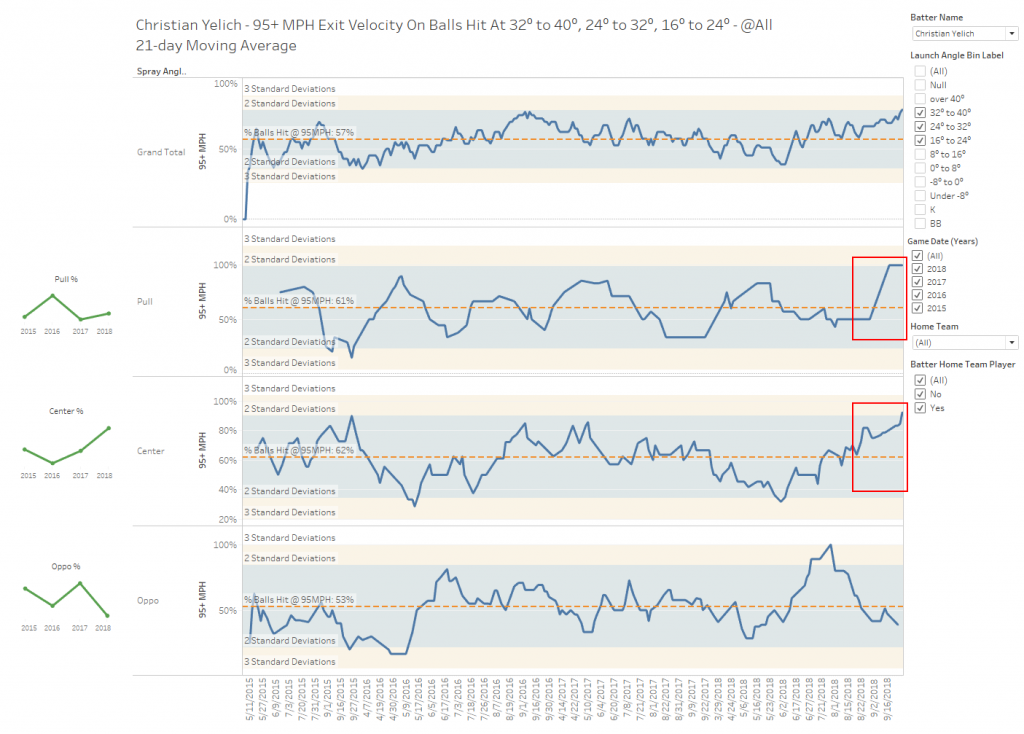 Yelich spent most of the entire second half above his 3-year averages for quality of contact (Eg: Barrel%, Hard %, however else you’re used to referencing it) for these types of fly balls. That being said, there are two things in Yelich’s batted ball profile that could qualify as real changes. The first is his use of Centerfield, where he hit 43% of his fly balls this year. After three years of a more opposite field heavy approach, Yelich has shifted from a 23/34/43 (Pull/Center/Oppo) approach to that of a 21/43/36 distribution. That’s 7% more of his fly balls going to his best outcomes in centerfield and right field, in a new home park that rewards him heavily for these types of batted balls. It may not seem like much, but it was worth an extra 3 taters last year.

The second change, and the main driver of his outlier HR season, was his quality of contact to centerfield. Christian Yelich homered on 41.2% of balls he hit in the air to center field at these launch angles, whereas in the three previous years he had a 14.9% HR/FB rate. This was worth an additional 14HR for Yelich in 2018.

Here are some visuals on what HR/FB rates look like for Yelich to each field based on how hard he hits the ball. I’ve only included his HF/FB% on batted balls that have chances for HRs for Yelich – everything else would also be 0%

Putting all this together, we could update our “what would you have to believe” equation for Christian Yelich to get him back to 30HR in 2019. Based on the above three charts, I could see where some of the quality of contact sticks to centerfield, as he’s hit balls at 100+ mph just as frequently in other seasons. The biggest changes were the number of balls that left that park, which could be chalked up to his new home park.

Using Steamer Projections for Plate Appearances we can begin plugging in the numbers:

Now the trick is to determine how much of the batted ball profile you’d like to regress out. I could use just his three year averages from 2016-2018.

Or I could completely regress out the uptick in quality of contact to both centerfield and rightfield and go with his 2016-2017 averages (excluding 2015 due to the ball changing mid-year).

Or I could use his three year averages on quality of contact, but allow the better use of center and rightfield to stick.

At the end of the day, what we’ve learned about Christian Yelich is that he certainly was dialed in for most of the second half of the season and especially for his exceptional September- when he put the Brew Crew on his back and led them to a division title. Unfortunately, without a major change in his batted ball profile, I still feel you can regress out most of his home run surge from 2018. As we’ve seen, perhaps he maintains some of the quality of contact and continues to hit more balls to center and right field, giving him a 27 HR season. The most likely way for Yelich to trigger another 30 HR campaign would be to increase his FB% to 30% or to increase his use of right field in the air while increasing his FB% to 28% overall – neither of which I’d bet on, but are also not out of the realm of possibilities as Yelich continues to grow as a hitter. This would be something akin to what Jose Ramirez has done in his transformation in the last three seasons.