This time around we’re going to be looking at some shortstops! 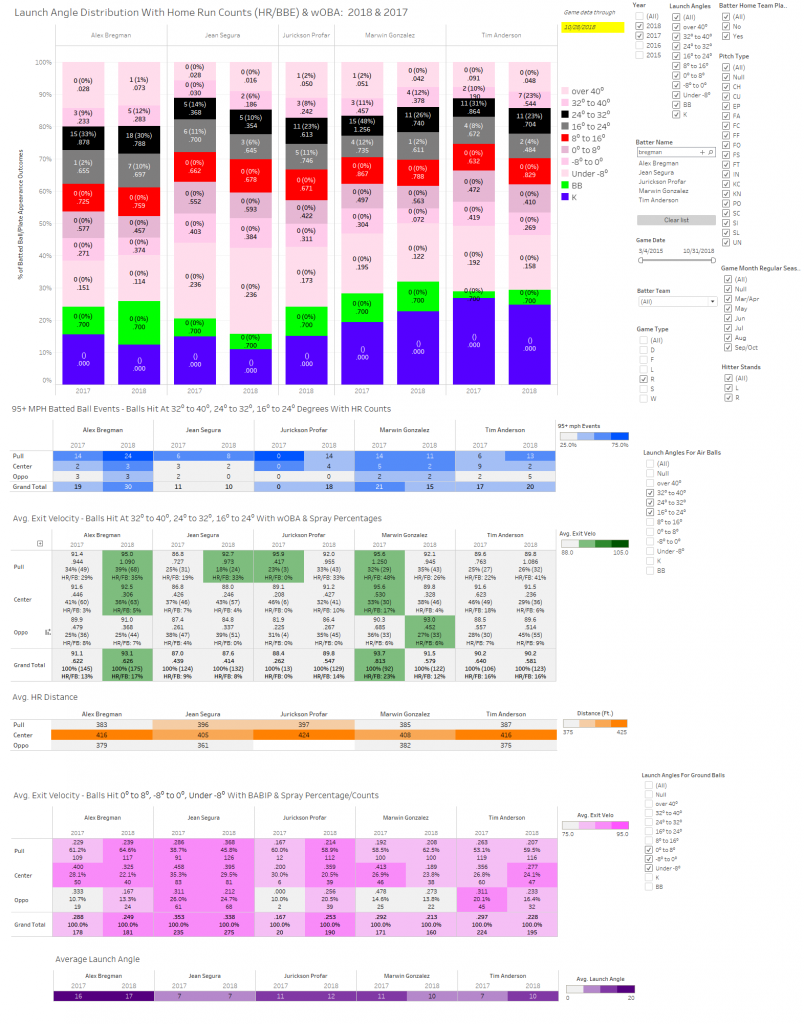 I know Bregman is more of a third baseman than a shortstop, but I wanted to cover his batted ball profile change somewhere in my series.

This is what I wrote about Alex Bregman before coming into the 2018 season:

Bregman is a different beast than the aforementioned shortstop options. He has pull-field power, but it’s not elite- just enough to get him to the 15HR mark consistently and push to the 20HR mark in good years. He does not possess consistent home run power to center or the opposite field, but he will find a few out there.

So what happened? Bregman improved in every part of his game. First, he hit the ball harder, and more frequently, to all fields. Second, he started pulling the ball more in the air. Third, he cut his strikeout rate down to elite levels (12%). And last but not least, he put more balls in play at the most favorable launch angles. This is how I summed up his HR climb just after the season ended.

That's how you make a 63% gain HRs in a single season.

My goal with Bregman was to assess the risk around a repeat 30 homer season. I think we can consider the plate appearances gains safe as he’s cemented himself in the top half of the everyday lineup. I also consider the K% gains both safe and negligible. That leaves the 8HRs from his vertical launch angles, horizontal spray angles (Pull%) and hitting the ball harder. 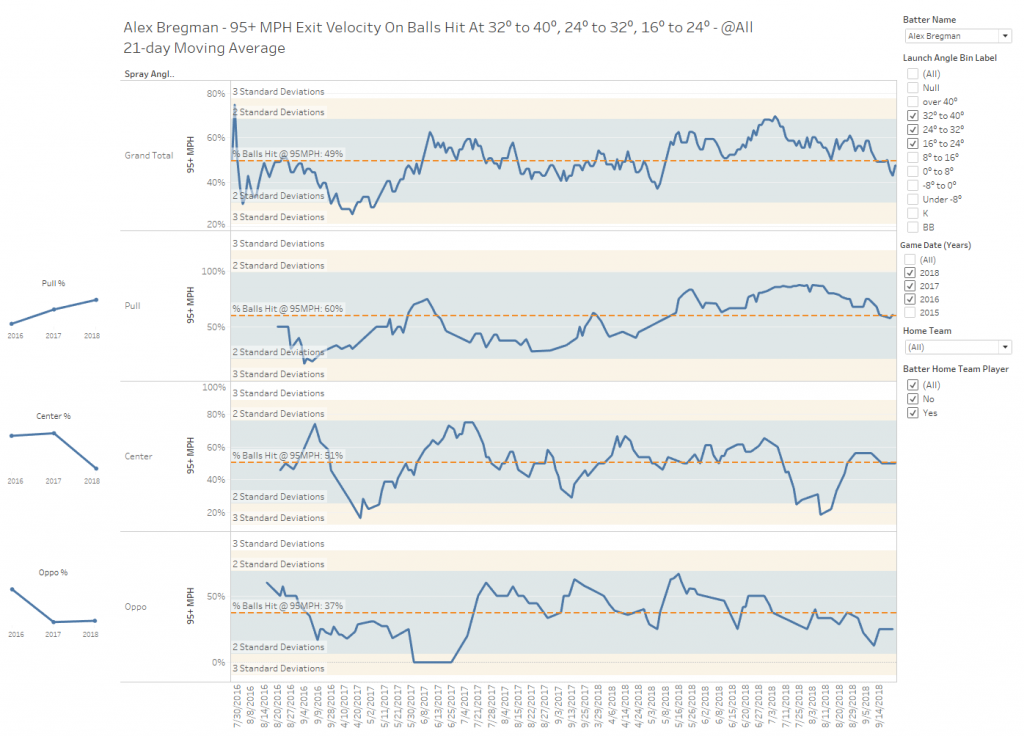 Well, what we can see in his control chart is that Bregman pretty consistently started hitting the ball harder in 2018 to the pull field. This looks like something he can maintain. It’s somewhat akin to what Jose Ramirez did. As with Ramirez, there seems to be equal opportunity to pull the ball more while still maintaining the gains to the pull field in top end exit velocity as there is to regress in these skills. For this reason, Bregman’s home run output looks pretty safe to me.

For me, Jean Segura is consistently underrated. Perhaps it was his early career learning curve with the Milwaukee Brewers where he consistently ran lower than average BABIPs while posting ISOs around .080. Since that time, two things have drastically changed with Segura. First, he’s greatly improved his groundball BABIP. We’ll remove all the choppers under -8° to illustrate.

There was a bit of over-achievement on the pull side, which we can regress out, but there was also some underachievement on balls hit back up the middle, so it all evens out. His other point of improvement since those days is hitting the low lines hard more consistently, resulting in a 100% increase in doubles from 2016-2018 from the less powerful time period of 2014-2015.

However, I’m not here to talk about that, I’m here to talk about his strikeout rate improvements. By chiseling it down to 10.9% Segura joined the elite ranks of players who never seem to strikeout.  Or has he? What we can learn by looking at his K% control chart is that Segura did make improvements, but over the course of the second half of the year, these rates reached what could be considered outlier levels. I do believe that the projection systems aren’t giving him quite enough credit on this particular skill. I’d be inclined to give him credit for a 12.5% strikeout rate, though moving back to the NL and (re)learning those pitchers may put a hiccup into my prediction. 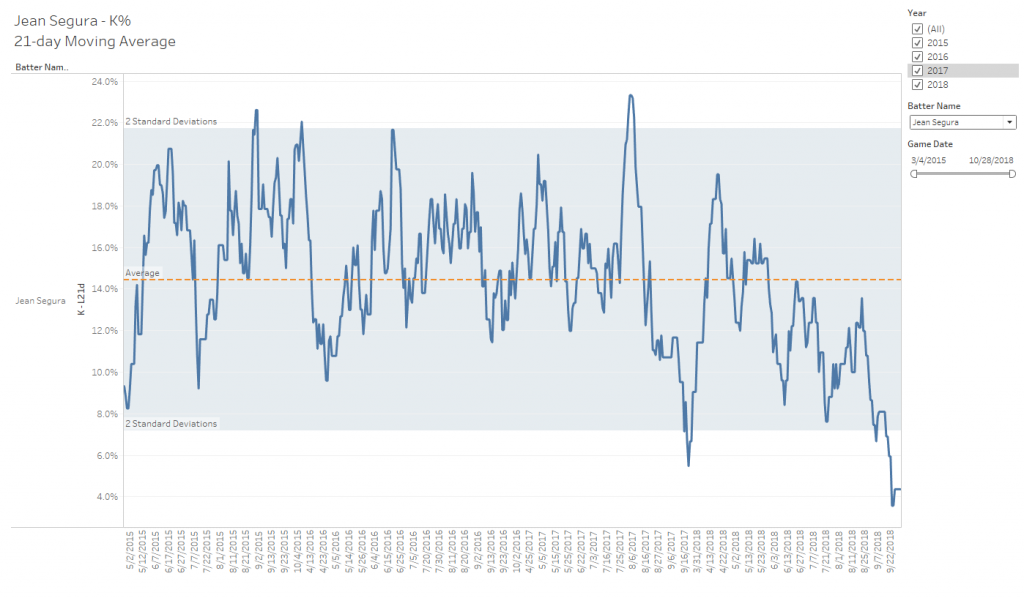 Jurickson Profar’s power showed up again in 2018, much to the surprise of most fantasy owners who had written him off long ago. Now, we know that Profar isn’t going to replicate Ramirez’ strikeout rates, but he does appear to be replicating his power approach on the balls he’s put into play. I must say, this profile has me very intrigued but I do want to dig into why his batting average and thus on-base percentage has been so low and if there is any hope for positive gains there. 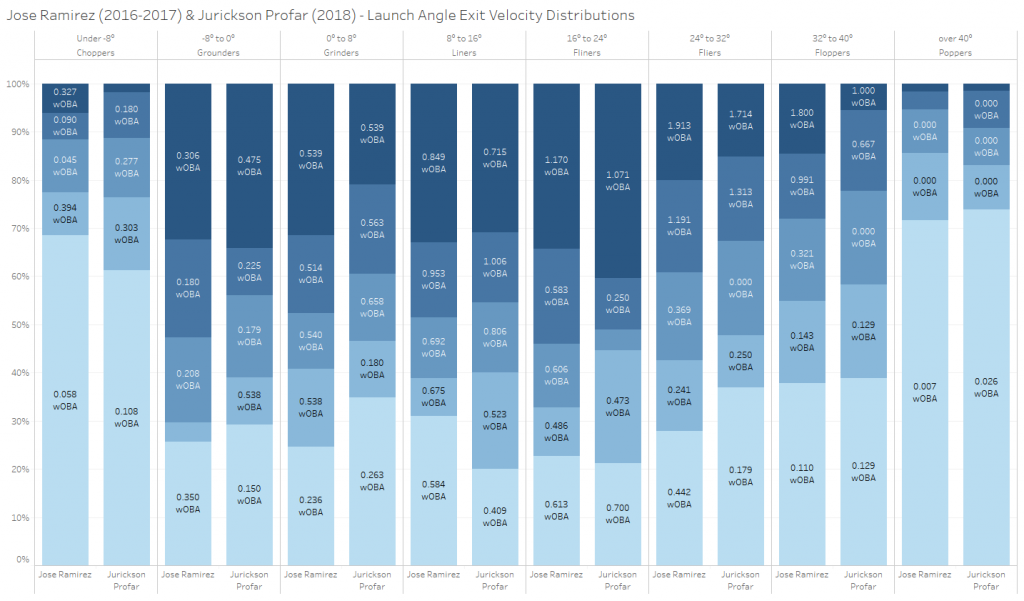 What I found is that Jurickson Profar seemed to hit every line drive into the shift last year when batting left-handed. Here is what his 8-16° spray chart looked like last year, and then I contrast it to what Jose Ramirez did from 2016-2017. 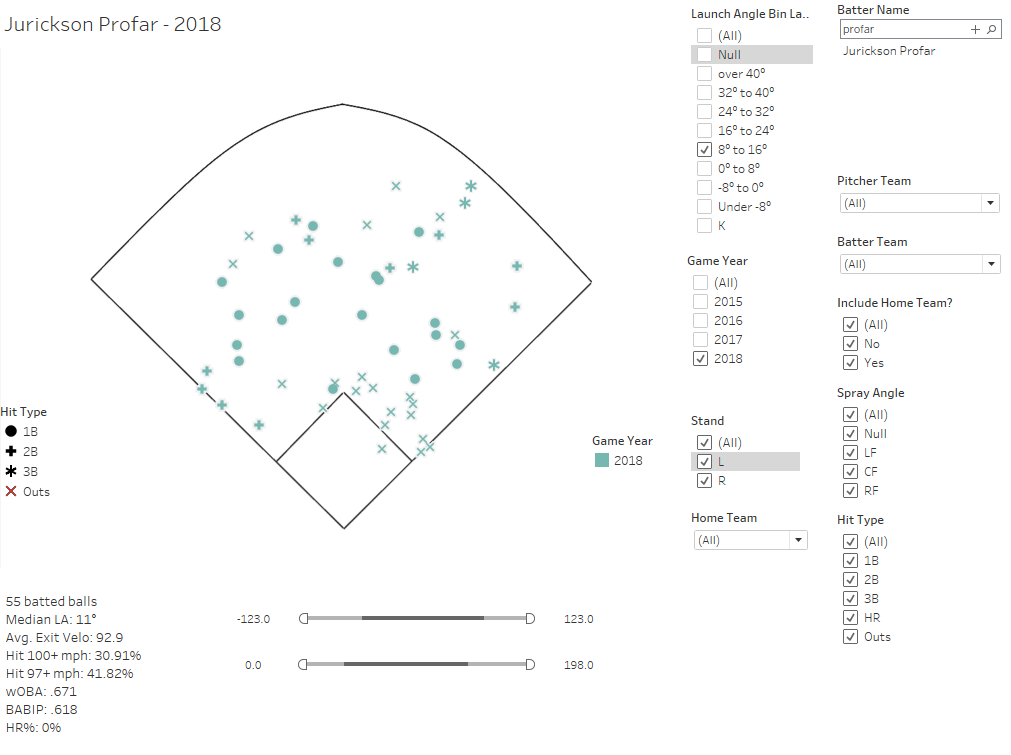 So here we see that Profar generated a BABIP nearly 100 points lower than Jose Ramirez on these liners. I’ve dug into these numbers every-which-way, including looking at just the left-handed at-bats for each player and I’ve come up with no logical explanation for it. On top of that, Profar has some room to grow in terms of hitting the ball harder on the ground to find a few more hits here and there as well. 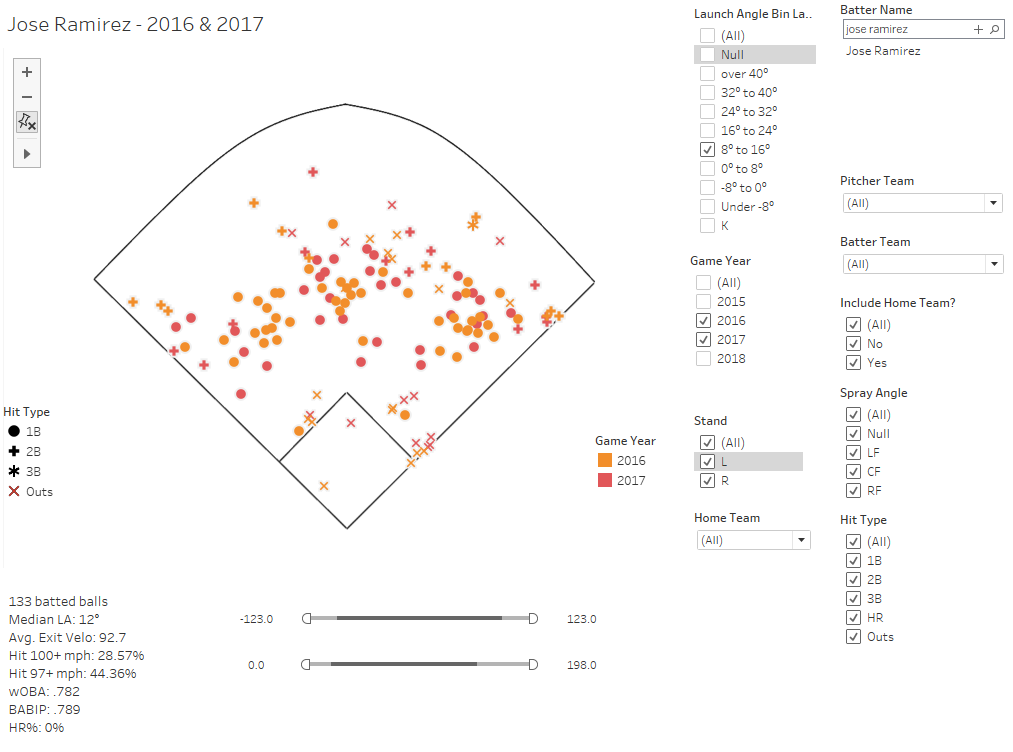 The last thing I’ll leave you with on Jurickson Profar is that he was generating more ideal contact as the season wore on. These types of batted balls lead to the best weighted on-base average outcomes. All of these things put together make me very hopeful for a continued breakout from Profar in 2019. 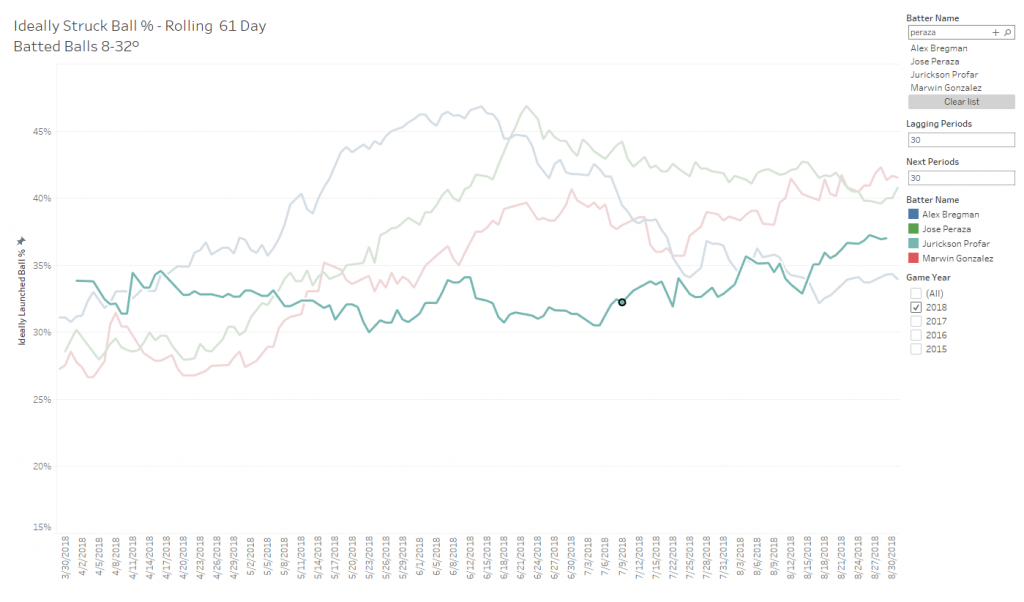 MARWIN GONZALEZ WAS ACTUALLY BETTER IN 2018 (KIND OF)

Yes, I know this sounds preposterous, but I promise there’s some truth here. While he wasn’t squaring up his flyballs in the first half of the year, and was hampered by a knee injury during June, Marwin really got it cooking in the second half of the season. When healthy, Gonzalez has shown power to all fields from both sides of the plate, though the injuries seemed to hamper his results from the right side of the plate more during the first half. The injuries combined with a slow start to the season derailed Gonzalez’ season in total, but we can still see the bright spots. Depending on where Gonzalez lands and how much of his multi-position eligibility he retains he could be a sweet bargain in 2019.

When you see me next I’ll be back to discuss outfielders. 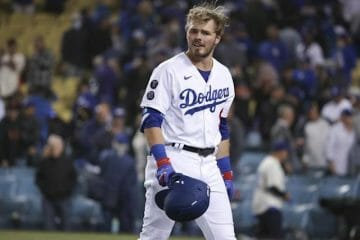