The end of the 2018 MLB season marks the beginning of an active offseason for most fantasy leagues, and the beginning of rankings season. Already, owners likely are re-assessing their rosters, exploring potential trades, or preparing for prospect drafts. To help prepare fantasy owners for the hot stove, The Dynasty Guru will begin its rankings push early this year! As such, it is an ideal time to revisit the Top 500 Dynasty League Players.

Normally, The Dynasty Guru publishes its updated Top 500 in early-March, following trades and free agent acquisitions. This year, we are providing a publicly-available preview of the updated top 50 immediately following the World Series. Further, you can obtain access to the entire updated Top 500, with an additional 100 players, with a small donation.

The Top 600 Dynasty League Players represents the opinion of this writer. Consequently, the rankings are consistent with an updated version of the Top 500 Dynasty League Players, published in July, and the Top 240 Fantasy Prospects, published in August. Of course, this ranking only includes a subset of prospects (200 total, to be exact). Finally, the following rankings account for a 16-team league with a standard, 5-by-5 scoring format, but also note changes in value for on-base percentage (OBP) formats.

With that said, and without further ado, please enjoy responsibly!

Dynasty’s Child Episode 96: Onto The Offseason 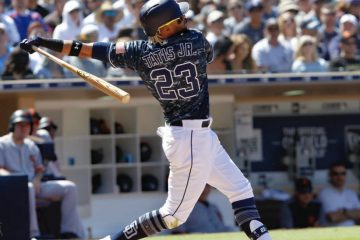 2019 Dynasty Risers and Fallers: First Base