How To Value Christian Yelich In 2019?

Christian Yelich is making me look really, really good this year. I’ve always been a fan of the contact-oriented ground ball machine even before he was traded to my hometown Brew Crew. What’s drawn me to Yelich in fantasy leagues is the fact that he maintains a high batting average, which keeps his floor high in my total bases leagues. What’s kept me acquiring shares of him anywhere I could is his elite exit velocity on air balls despite the fact that he’s maintained a flyball rate under 25% for his career. But is Yelich a good investment for 2019 and beyond?

Jeff Sullivan wrote an excellent piece this week over at Fangraphs this week detailing Yelich’s first-pitch approach changes throughout the 2018 season. But I want to focus on how his batted ball distribution has changed for 2018, and if you can take his HR/FB spike to the bank in 2019. After all, you really want to know whether you can count on another 30 home run season from a kid who can swipe 20 bases while triple slashing .300/.380/.560, right?

Yelich has been crushing the ball to centerfield this year, particularly at home (9 of his 13 centerfield home runs have come at Miller). His HR/FB spike is driving his MVP performance.@fangraphs has a nice article on his first pitch aggressiveness.https://t.co/RqWg3Jvoe0 pic.twitter.com/8crPKY5oQV

Yesterday I posted this on Twitter without any actual data or visualizations to back up my claims. Sure, I could cruise over to xStats.org and confirm that his expected xwOBA or xSLG is supported by his exit velocity, spray angle and home park changes, but that will do nothing to tell me about how likely he is to repeat his 2018 MVP onslaught. If you know anything about me, you know that I’m going to throw a bunch of data on the page and make you look at it, consume it, internalize it and make you draw your own conclusions.

First of all, it’s worth noting that not many players have the kind of power Yelich does to all field through the air. Below you’ll see the batted (and non-batted) ball profiles for the Top 10 MLB Home Run leaders. 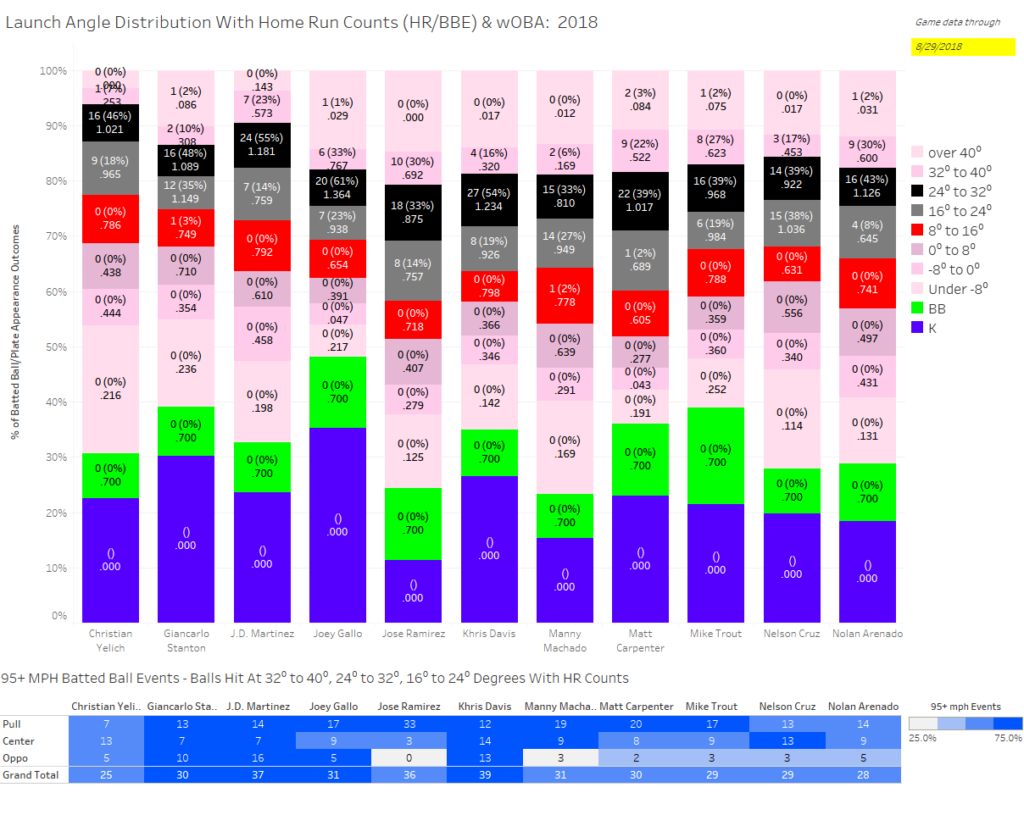 Stanton, JDM, Gallo and Khris Davis are a cut above everyone else. They have elite exit velocity (as a refresher, elite exit velocity is defined as a percentage of balls hit at > 95mph, loosely correlated to Hard% or Barrel%). Jose Ramirez gets there a bit differently, as he relies on pulling the ball hard – he’s doing it on 50% of his flyballs this year. Machado has elite exit velocity to the pull-side and center, but not so much to the opposite field. Yelich, however, just crushes the ball to all fields in the air, and what’s most notable are the homers to center this year.

Luckily for me, I’ve created some control charts that allow me to determine if a player has made a sustainable change (E.g. Nick Castellanos Pull%) or if it’s more of a blip on the radar, doomed to regress  (E.g. Didi Gregorious’ April binge). Here’s what we’ve got in Yelich’s 95+ mph exit velocity control charts to each field on balls hit in the air. 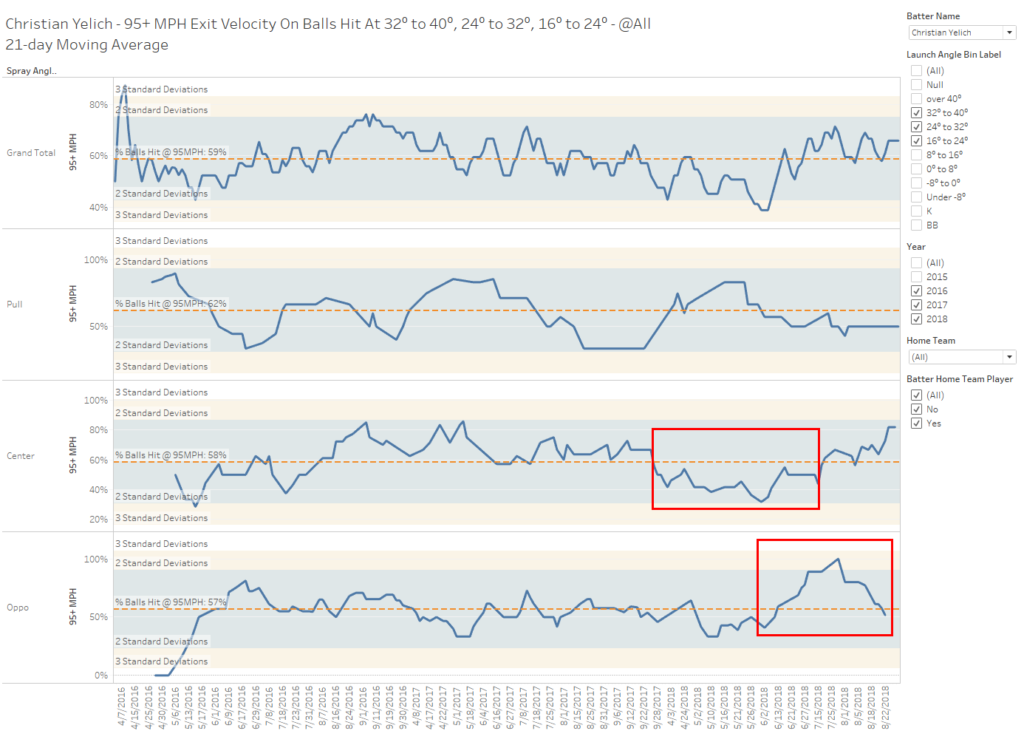 The Grand Total section is worth mentioning first. You can see that since late June he’s held his exit velocity above his three-year average. If we bring our eyes down to the Center and Oppo areas we can see this is what’s driving the surge. For a two month span he was absolutely destroying balls to the opposite field, and more recently he’s crushing them to center. The opposite field spike went “full outlier,” peaking outside the 2 standard deviation range- implying it was likely too good to sustain at that rate.

The more recent centerfield spike is interesting because it’s occuring at a level that’s in line with some of his best stretches from late 2016 through late 2017. We could actually say that Yelich was under-performing: he had a long standing baseline of hitting more than 60% of all his air balls to centerfield at elite exit velocities and that his current performance is a correction (with a little over-achievement). As stated above, this is a boon for home-field Yelich- these balls are leaving the yard at a 39% clip to dead center. This is contrasted against a 14% mark in his old home park back in Miami.

Speaking of different parks, let’s look at his distribution at all parks in 2018 as compares to prior years. I’m going to split it up into 8° launch angle bins as is the industry standard for looking at this data. The first chart shows the absolute count of balls hit at those launch angles and are color coded for how hard they were hit. The hardest hit balls are 100+ mph and are the darkest bars on the chart. The second graph shows the same data on a 100% chart so you can compare year-over-year changes in the distribution. 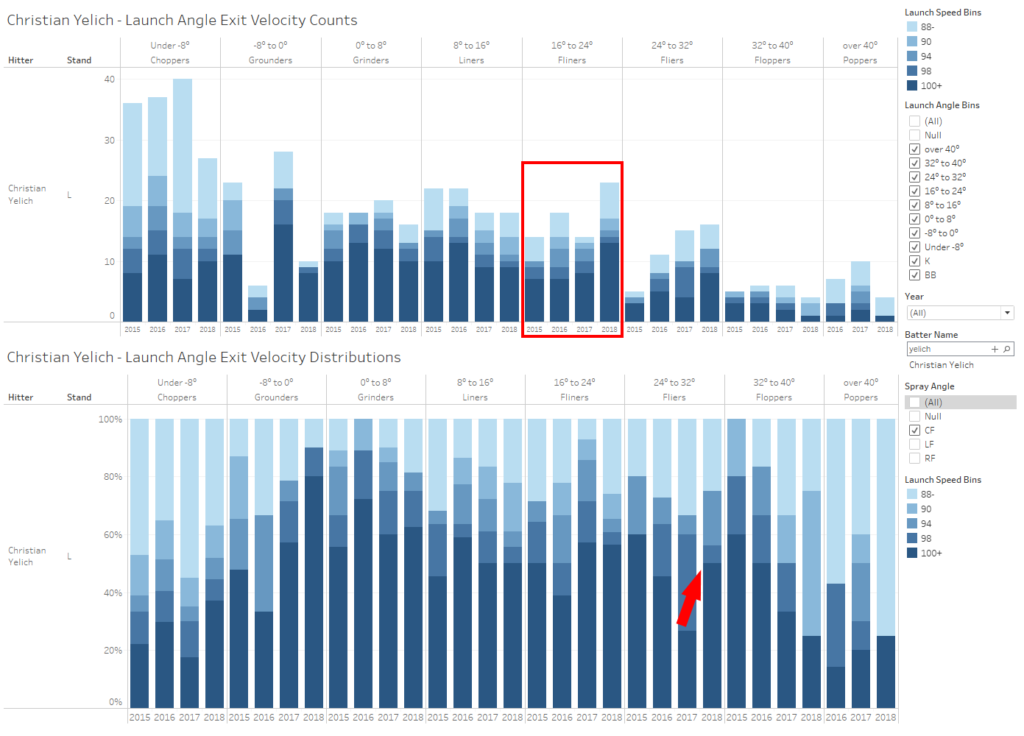 What we can learn from the data in the top chart is that Yelich is hitting more balls to center this year at home run launch angles (16-40°) and he’s hitting more balls at 100+ mph, which is what you need to go deep to center. Bringing your eyes down to the second chart, we can see that he’s not necessarily hitting a greater percentage of his 16-24° balls at 100+ mph, but he is in the 24-32° bin (best chance for HRs at those launch angles). If I analyze that second bin where he’s shown improvement over 2017, it appears as though 2017 was more of the outlier than 2018, which corroborates what we learned from the control charts.

So what does this mean for you as a fantasy owner when trying to value Yelich in 2019? That depends on how much of the batted ball profile you want to believe will stick. In 2016, Yelich had a 29/31/39 spray distribution to Pull/Center/Oppo but his 2015 and 2017 seasons looked much more like 19/36/45. This year Yelich has used centerfield much more frequently and has produced a 21/44/35 distribution. That fact, in combination a return to elite exit velocity, has produced a HR/FB% spike of 30% to centerfield. As two points of comparison, Giancarlo Stanton and J.D. Martinez only homer at about a 20% rate there. At a 20% rate Yelich would be closer to a 27-28 HR pace.

All in all, Yelich is having a magical fantasy season fueled by elite exit velocity and lots of ideal contact. You can safely regress most of this homer surge out of his risk profile for 2019. That being said, if he ever starts pulling the ball toward right at Miller Park he could experience a Jose Ramirez-esque breakout that sticks in the homers category. For now, as excited as I am, I’ll wait to see how his batted ball profile settles in during the first half of 2019.

How To Value Christian Yelich In 2019?