While Juan Soto won’t officially log a full season of at-bats in 2018, we’ll still consider 2019 to be his rookie encore…his sophomore season… his… whatever you want to title it. As a Juan Soto shareholder, I’ve been following his rapid ascent quite closely. Once he debuted I was quite happy to gobble up all his Statcast data and start finding comps for his batted ball profile. Now that there’s been significant time to make some preliminary observations, I want to share with you the a few things of note from his profile. Again, if you’d like to play around with the tool I’ve made in Tableau, please feel free! 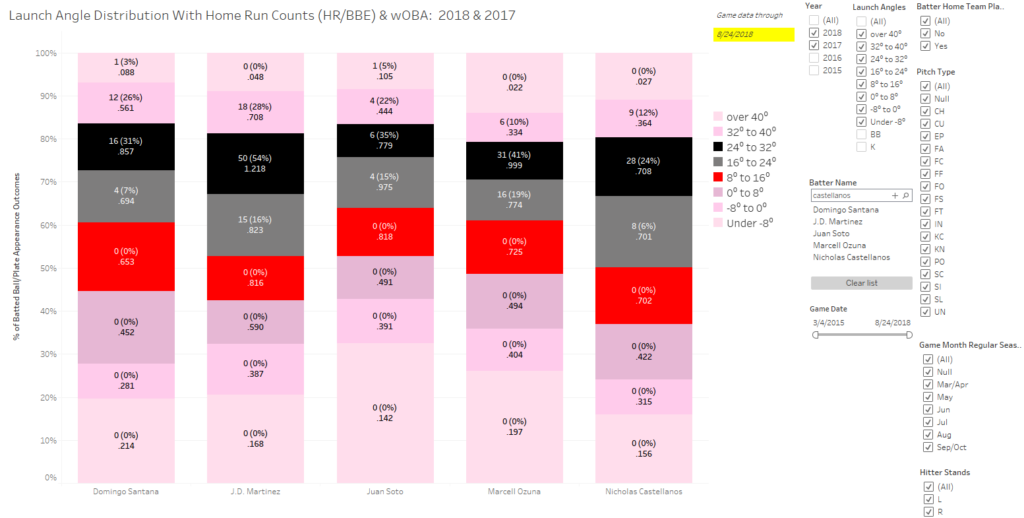 Some people might point to Soto’s average launch angle ( 6°) to tell you his batted ball profile might be suspect. That’s a great place to start, but what I’m most interested in is his sweet spots for doing damage between 8 and 40 degrees, and this is where my mental comps start to pay off. In this regard he’s very Ozuna-esque, even homering at about the same rate in each of the vertical launch angle bins. What you’ll immediately notice about Soto, which is backed up by his average launch angle, is that more than 50% of his batted balls are hit with less than 8° of loft. Further, if you include all plate appearances, the walks and strikeouts paint a picture of an extremely limited set of damage-inducing plate appearances (much like Santana). This is of particular importance to those of you playing in HR/TB/SLG leagues that don’t have a OBP component.

The bottom line here is that Soto just isn’t up to snuff on hitting the ball hard on the ground. As a secondary issue, pulled ground balls don’t turn into hits very often. He’ll need to continue to progress and figure out how to hit the ball back up the middle and the other way. Right now he looks like a poor man’s Ozuna on the ground as well as in the air. The good news is he’s got plenty of time to grow as a hitter.

Juan Soto is an amazingly-talented young ball-striker, but there are still multiple holes in his game that may allow for exploitation by an adjusting league. I’m not saying that anyone should be selling high on Juan Soto by any means, but I’m hoping to expose some of his risk profile entering 2019. While you can’t help but get excited about your shares of Soto in dynasty leagues, it’s good to know where you will need to bolster your offense should Soto hit speed bumps. Keep watching Soto’s pull rate on fly balls and keep watching his average launch angle to see if he’s making progress as we close out 2018 and get going on 2019. If you leave this article with one takeaway it should be to not just pencil him in for an even more impressive season next year because there’s still work to do.

Would You Rather Own Juan Soto or Ronald Acuna?