Is It Time To Panic on Chris Archer?

When I last had your attention, I was advising patience with the erstwhile frontline starter, despite an ugly 7.84 ERA over four starts. Well, here we are a month later. Let’s see what the next five starts have shown us, and whether you should buy, sell, or hold Big Tree.

REMINDER- THESE ARE ALL SMALL SAMPLE SIZES. I don’t think there’s enough here to definitively say one thing or another about 2018 Chris Archer. Rather, I’m hoping to identify any serious changes to keep an eye on as we get more and more innings to analyze. So, let’s see what changes we can see.

First things first- let’s check in on the standard/surface stats since my last piece. He’s sporting a 5.64 ERA for the season and a 4.22 ERA since April 16 (his last five starts).  Better than that 7.84 ERA through the first four starts, but still not great. So, let’s see what else we’ve got.

Aside from that strikeout rate dropping, all other stats are positively regressing. We also took a look at his pitch usage, so let’s check in there too. 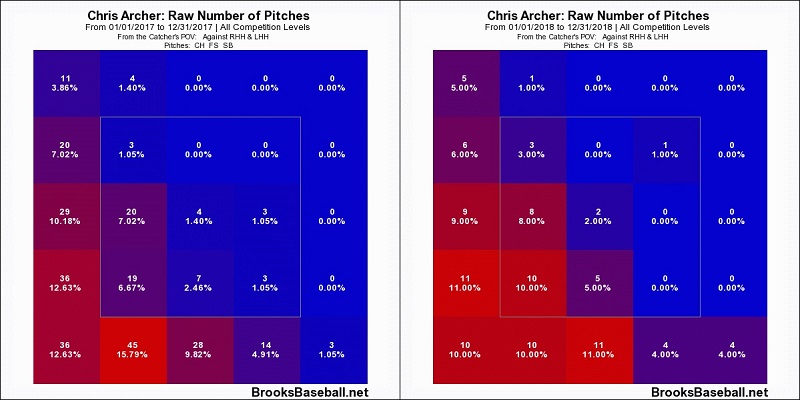 It looks like he’s leaving a larger percentage of his offspeed pitches in the zone as compared to last year.  Shortly after my last piece, Jason Collette wrote up Archer and pointed out that he has moved over on the rubber several inches. I wonder, does this movement correlate to a different release point, which would speak to why the pitch is a little more over the plate? 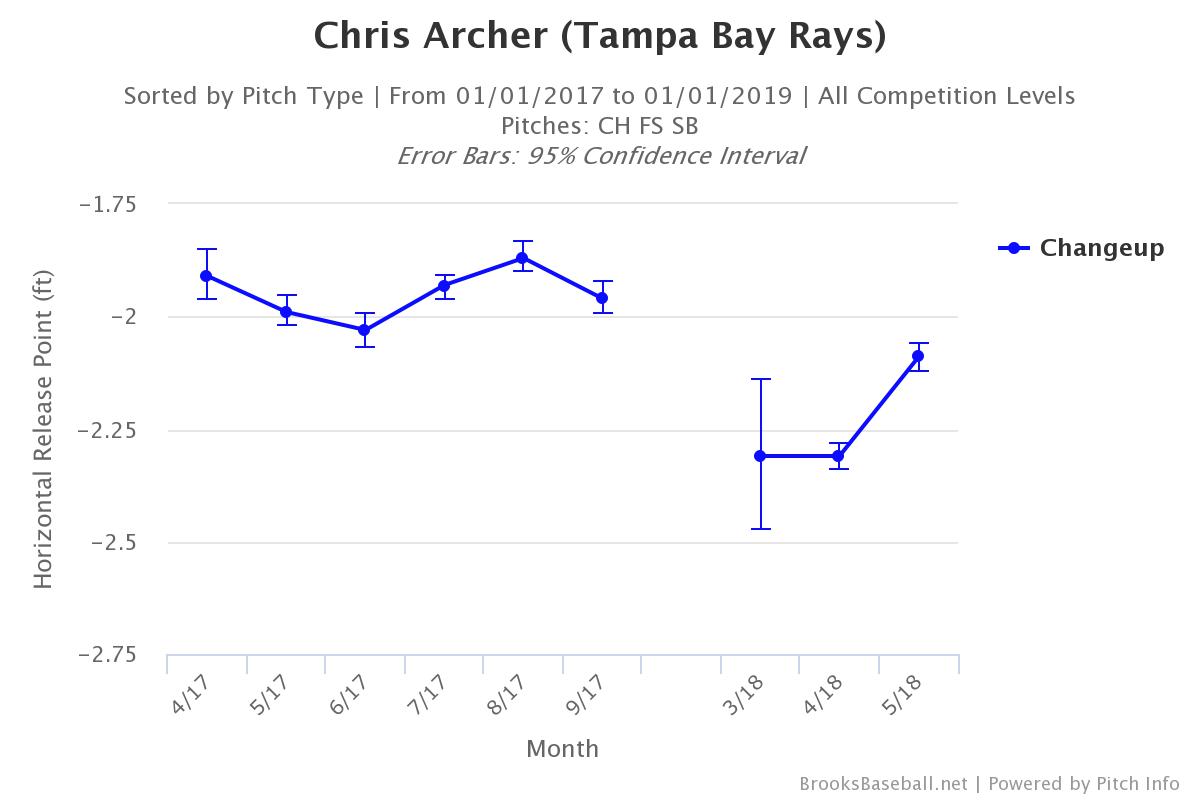 The horizontal release point looks to be a bit farther off the center of the rubber. Based on my very basic research here, it looks like Archer is still getting a feel for his changeup from this position on the rubber. From what we’ve seen with the change-up’s location, he is still working on it. But his results are generally improving, so I anticipate the pitch to regain its effectiveness.  Now, let’s see what else we can see- specifically, let’s check in on those lefty/righty splits. Here are his splits, including how far off of his career averages they are.

Big positive regression against lefites, bit of a decline against righties. But he’s generally closer to his career averages across the board and nothing else is jumping out at me, so I’m chalking this up to small sample size noise – remember that we’re using samples of four and five starts here. If anything, I bet it’s an extension of his move closer to the third base line, and if it doesn’t regress on its own it will regress as he gets more comfortable.

Last time, I told you to keep the faith. I’m repeating myself here. Archer is improving from his terrible start to the year, but he isn’t all the way back yet. I think Archer represents a buying opportunity here, as it’s possible that he hasn’t improved enough for his current owner’s liking. As Jason indicated in his piece, pitchers do stuff for a reason, so he’s got a reason for his movement on the rubber. Remember that his fastball and slider are more effective than last year with this move, so it could just be a matter of time before we see big improvements.

I am going to want to see what’s up with that decreased strikeout rate, though.

Fresh Takes: Is Yangervis Solarte Due For Regression?

Is It Time To Panic on Chris Archer?