Tyler Glasnow has puzzled scouts, analysts, and fans for the last few years with his tantalizing talent, but frankly awful results. Major League Baseball’s pre-2017 #9 prospect and owner of a 2.02 ERA and 11.9 K/9 across six minor league seasons? That couldn’t possibly ALSO be the man behind a 6.63 MLB ERA and inability to retain a big league job. It is, and he is Tyler Glasnow. He contains multitudes.

Coming into 2018, Glasnow was slated to work as the long man out of a Pirates bullpen, and the early days seemed to show the signs of new-found life. But that’s what the black and gold enigma that is Tyler Glasnow has always done: teased and taken away. Giving up merely three hits across his first 25 batters faced, Glasnow has more recently imploded, giving up seven earned runs across his last three outings.

So, what is the problem?

For a 23-year-old pitcher who can touch triple digits and sit around 97 MPH with his fastball, Glasnow should be dominating, right? His pitches should be ‘valuable’, right?

Prior to 2018, Glasnow was reliant on a pretty normal three-pitch mix of fastball, curveball, changeup.

At a glance, his usage and velocities are not out of the ordinary, but a lowly six MPH difference between fastball and changeup is less than ideal. This issue certainly came out in the results (Kershaw for comparison):

Inability to separate hitters from sitting on fastball and changeup led to the latter being, well, absolutely destroyed. While, at the major league level, Glasnow’s curve and fastball were hardly valuable pitches, the changeup was clearly an issue.

The natural step, and what Glasnow and Pirates management/coaching staffs did, was to eliminate the changeup from the young prospect’s repertoire.

The early days of the 2018 season in the big-league bullpen have seen Glasnow ditch the changeup and add almost 2 MPH in velocity.

The results? Not great. Granted, this is over a sample size so small it is almost criminal to discuss, but Glasnow has walked over 6 batters per nine, owns an ERA of 5.84 and has done little to answer the many questions that have plagued him his entire big league career.

Is there a solution?

While Glasnow’s struggles have yet to be shaken, the 2018 season has shown some glimmers of hope. Glasnow’s elimination of the changeup should have improved his pitches as a whole, and perhaps they have. Much of Glasnow’s early 2018 struggles have come from an inability to locate his remaining secondary pitch: the curveball. From FanGraphs pitch locations, it is clear Glasnow has been ‘hanging’ his curveball, which he historically has not done. A bad, but luckily fixable, issue. 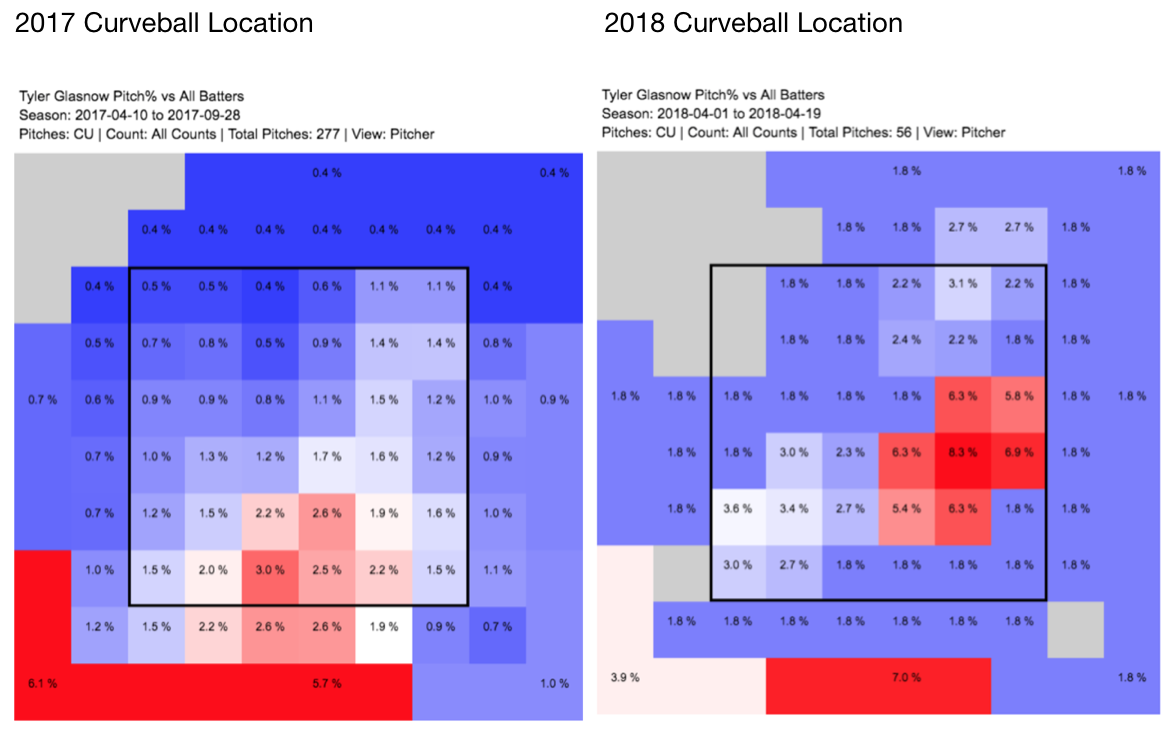 Glasnow may very well be the best example that velocity isn’t everything. Pitch placement and pitch selection just haven’t been there for Glasnow in his MLB career, but he has dominated the minor league levels relying on his stuff. Keeping his curveball down and locating his fastball are certainly things coaches and management have encouraged Glasnow to do, but there comes a point where he has to prove he can.

Ray Searage has been touted as a pitching wizard, fixing the likes of Ivan Nova, Francisco Liriano, and (current top 5 strikeout leader) J.A. Happ, but it seems as if Glasnow has, thus far, evaded his grasp. If Glasnow is able to locate his curveball and finally use his velocity to enhance his fastball he may be able to carve out a multi-inning role that the Haders and Bradleys are bringing back in style. Deeper leagues that give value to holds could see Glasnow’s rise to relevance, but he is unlikely to claw his way back into the rotation or to surpass Rivero in the near future.