Fantasy owners have started to see some of their long stashed and scouted prospects hit the major leagues for the first substantial amount of time this season. This article will examine some of the better prospects who have had enough playing time to make evaluations on how they will perform the rest of this season. Note that this article does not extend beyond their performance this season.

Mancini has gotten more consistent playing time in May after sporadic lineup appearance in April. He has taken advantage of that, posting a .877 OPS, which has been helped by a decreased strikeout rate. However, he has a limited hard hit rate, which calls into question those results and his 21.9% HR/FB.

Zimmer has had a promising start to his major league debut, beginning with his strikeout rate, which is currently at 29.3%. That is nearly exactly in line with his minor league numbers, and his 11.5% swinging strike rate suggests he could be in line for even fewer strikeouts.

However, digging a little deeper suggests big problems are on the horizon for Zimmer as pitchers make some adjustments to him if he doesn’t change his approach at the plate. For one, he has shown astounding control of the zone as he has swung at just 14.4% of pitches outside of the strike zone. This has something to do with the fact that pitchers are challenging him as if he were a slap hitter with little power, think Dee Gordon, as 47% of pitches he has seen have been in the zone. His current 28.6% HR/FB will likely convince pitchers in the near future that they need to change their location and pitch mix and when this happens we will truly get a feel for how Zimmer will fare early on in his career. The most likely scenario certainly seems that his strikeout rate will balloon given his minor league track record and the swing and miss present in his game. a crater in average seems pretty likely and Steamer’s current projection around .230 seems like a good mark to believe in.

Zimmer has shown the power and speed potential of his minor league numbers but his power production doesn’t appear to be safe either. Though he already has two home runs in 45 plate appearances, he has just a 30% flyball rate. That leaves both his power and on-base ability in question meaning dynasty owners should focus their attention elsewhere if they are a looking for a team savior this season unless there are major changes to Zimmer’s profile.

Cody Bellinger looked prepared to challenge Aaron Judge as the newest elite power hitter to join the majors, but he has gone cold to end May and begin June as he owns a .645 OPS with 10 strikeouts in 29 plate appearances. The inflated strikeout rate isn’t a new problem as it is at 34% for the entire month of May as well. Predictably, that has hurt his average and ability to get on base and his average has fallen from .320 to 252. With a 64% contact rate, in line with Miguel Sano and Chris Davis, maintaining a decent average will be a concern all season.

Thus, Bellinger will need to continue his power surge to remain fantasy relevant. The good news is that he has shown no sign of a power decline. He still maintains a .315 ISO that again rivals Davis and Sano. His 41.4% hard contact also backs up the power and his 50% flyball rate will give him plenty of opportunities to display it.

That said, the power contributions from Bellinger should boost fantasy teams all season. Like Davis and Sano, he will have hot and cold streaks. Unless his profile changes, however, I’d be willing to wait out the cold for the rewarding stretch to come. 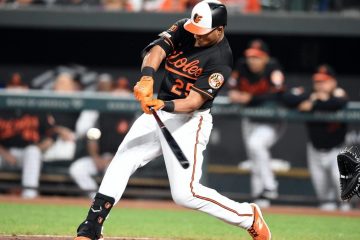 The quiet brilliance of Randall Delgado

Tim
on Desk of the Editor – Humankind. Be both.