Fantasy Outfielders Whose Stocks Will Rise

Fantasy owners are always searching for the next player who can make the jump from mediocrity or obscurity to big-time fantasy studs. While we’re only a few games into this season, there are two distinct players I have in mind that can each could see their fantasy stock rise considerably.

Santana is a player who has had a fair bit of hype at times, but thanks to the Brewers’ crowded outfield is a player who has gotten lost in the shuffle this season. He packs plenty of power in his swing, and there are a bevy of stats to choose from that illustrate this. One is Santana’s career 27.1% HR/FB rate. This is an exceedingly high rate but is backed up by a 6.4% barrel rate in 2015 and 6.0% barrel rate in 2016. Players with similar barrel rates include sluggers Evan Gattis, Adrian Beltre, George Springer, Christian Yelich, Todd Frazier, Nolan Arenado, and several other impressive names. Needless to say, that’s good company as the majority of these players are fantasy mainstays.

This isn’t to say that Santana lives up to any of those players in areas other than power potential. The most notable problem for Santana is his plate approach, which can aptly be described as a mess. Santana has struck out in 34% of his major-league plate appearances to this point in his career, and based on both his major and minor league resume there has to be concern that will never change. What’s worse is that, in Santana’s attempt to remedy this problem last season, he lost all of his aggression at the plate. Santana’s 41% swing rate would have ranked toward the bottom of all qualified hitters. There are notable names in that area, like Wil Myers, Christian Yelich, and Mookie Betts. However, his overall contact rate fell 10% lower than each of those batters and his in-zone contact rate was more than 5% lower than each of the aforementioned hitters. Swinging infrequently without a lot of contact isn’t a good recipe for a power hitter, yet that’s exactly where Santana finds himself.  Santana will need to correct this, or else it is difficult to imagine him as a consistent fantasy asset.

That’s a huge caveat that suppresses his value, but there are more positives worth noting. The Brewers are putting him in a position to succeed as in early returns this season he has batted fourth and fifth in the lineup. That means he is in a prime position to drive in and score runs, and while he has yet to cash in on that due to early season struggles the Brewers have shown the capability of scoring a lot of runs.

The takeaway from all this is that there is plenty of work for Santana to do and he has to fix his mess of a plate approach to make positive progress. There are key pieces to the puzzle already in place, however, as he has a prime spot in the batting order and the power to make that count.

Smith was traded twice in quick succession this offseason after a season worth taking note of in 2016. Perhaps his value would’ve been higher if Smith had stayed healthy all years, something fantasy owners should take advantage of. Smith’s main fantasy asset is his speed, as he had a track record of racking up stolen bases throughout the minor leagues. In his short stint in the major leagues last season, that continued as he swiped 16 bases in 24 attempts. Admittedly, that success rate will need to improve for Smith to maintain a green light on the basepaths, but considering last season was his debut, it is reasonable to expect things to improve. Another level of concern is that Tampa Bay isn’t generally aggressive in attempting stolen bases as a team, though Smith does already have one stolen base through just eight plate appearances this season.

Another way Smith can boost his value is by improving his batting average and forcing the Rays to move him up in the lineup. Smith is currently pushed toward the bottom of the lineup, thanks to Kevin Kiermaier being locked in towards the top of the lineup and Corey Dickerson leading off. However, if he improves his batting average, he could force the Rays’ hand in moving him up the lineup. It is reasonable to expect his average to rise given Smith’s 60% groundball rate. Given the combination of that profile and his speed, it should be expected that his .300 BABIP from last year will see improvement. In addition, Smith exhibited good plate discipline throughout his time in the minor leagues, as he approached a walk rate of 12% consistently and did not exceed an 18% strikeout rate in any full season of plate appearances. That combination of skills should make him a candidate for the top of the lineup for years to come.

There are some concerns surrounding Smith, however, notably the fact that he hasn’t proven he can hit left-handed pitching. Smith batted just .080 against left-handed pitching last season, and given Tampa Bay’s willingness and desire to use their bench options when the platoon advantage dictates, it is nearly a certainty that Smith won’t get a full-season of at-bats this year. That will put a dent in his value, but at just 23 years old Smith has a chance to develop his ability to hit left-handed pitching. Even if he is unable to, a move towards the top of the lineup, improved batting average, and stolen base capability should turn him into a solid three-category contributor for several years. Currently ranked 400th on the TDG 500, Smith could see his stock rise considerably this season. 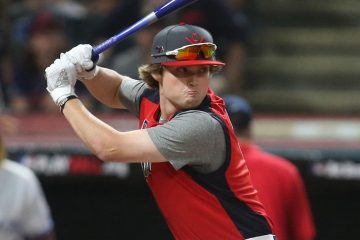 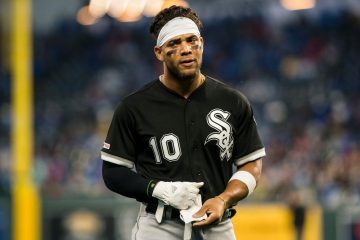 TDG Top-300 Plus: Three more players who should be on your radar

Fantasy Outfielders Whose Stocks Will Rise