Here are the previous parts to the series:

If you are new here, be sure to check those out first for a more proper introduction. I am here to discuss some middle-infield prospects who I think have a chance to breakout next year and shoot up prospect lists, reach the Majors, and even help your fantasy teams, and soon.

Shed Long, 21, Reds, and Joey Wendle, 26, Athletics: When I first saw Mikey Garrison and Frank Sides‘s articles on Long and Wendle, respectively, I was initially upset that they had ‘stolen my thunder,’ but then I realized that it leaves me with more space to talk about other guys I like, as you will see below. Check out both of their articles for the latest scoops on Long and Wendle, two very different players with similarly exciting futures ahead. Shed Long also gets credit for a 70-grade name, and I swearrrr I am not becoming a Reds fan, guys. Promise.

Brandon Dixon, 24, REDSSSSS: Okay, hear me out. It’s not just because he bleeds Cincinnati-red like I apparently do now; Dixon actually has a fighter’s chance at becoming a power-hitting second baseman with average speed, a Dan Uggla who can steal 10-15 bases, if you will. The Reds are reluctant to say what position he actually plays , as he was listed as a second baseman but played only first and third when he was laying waste to pitches in the AFL. I invest in bats and worry about defense later, and while Dixon’s contact issues and age shouldn’t be ignored, neither should his ultimate upside as a 25/15-guy who can hack it at second.

Max Schrock, 22, Athletics: Reds over A’s in the 2021 World Series, you heard it here first. I am not as in love with Schrock as FanGraph’s writer Carson Cistulli is, but I must admit, after Carson put me on to Corey Kluber right before he broke out, I am inclined to listen attentively when he declares a former 13th-rounder a future MVP-candidate. I too am infatuated with low-strikeout rates for minor league hitters, and you can’t get much lower than Schrock’s career rate of 7.5%. I think his defense at second is underrated, and if he can tap into just a bit more power, he could end up a steal for the Athletics and anyone who acquired him this offseason like I did 🙂

Anderson Tejeda, 18, Rangers: What he did as an 18 year-old is just ridiculous, tearing through three leagues and ending up being ranked as the fourth best prospect in the entire Northwest League as one of the youngest players in the league. I am quite frankly torn on Tejeda’s future. On one hand, the power we saw at his age and against that level of competition, all while at a premium defensive position, should make me want to dive in head-first. However, I can’t help but hesitate when I see his 35.1 K%. I know, I know, he’s eighteen playing against college graduates and first-round draft picks. But still, strikeouts can be a fatal flaw (ask his teammate, Joey), particularly at the lower levels. If Tejeda can stick at shortstop, it may not matter, but if he gets moved to second or third and does not make substantial changes to his approach, plate coverage, and pitch recognition, he may never make it out of Double-A. He’s got the biggest fantasy ceiling out of anyone on this list, but also possesses a scary-low floor. He is the anti-Max Schrock, really. Would be nice if we could combine them into one power-hitting, low-strikeout, middle-infield machine, but I wouldn’t hold out hope for that type of technology reaching the open market any time soon.

Andres Gimenez, 18, Mets and Wander Javier, 18, Twins: Two big-name July 2 signees from a year ago, both of these guys have yet to make it stateside, but both offer a lot of potential on both sides of the ball. Gimenez is the guy to get really excited about here, but DSL stats are so flukey that I’m not even going to list them here (but go look at them!!!). Javier only played 6 games before getting hurt, but those who saw him before the injury were very impressed. I don’t want to say that either of these guys has as high a fantasy ceiling as Tejeda, based solely on the fact that we just saw the latter destroy short-season pitching at the same age these guys were in the DSL. But a year from now, these three could easily be the next wave of shortstop prospects worth getting exciting about. Javier is a nice sleeper in my opinion and is by far the cheapest to acquire on this list, but Gimenez is the guy I like the most.

The Three Luises: Urias, 19, Padres; Arraez, 19, Twins; Alejandro Basabe, 20, Diamondbacks:
Listed in order of personal preference, Urias offers the most upside and perhaps the highest floor out of this trio. Here is what was listed under his Relevant/Interesting Metrics at FanGraphs: “Produced .330/.397/.440 slash line and just 6.8% strikeout rate in Cal League at age 19. Was 3.4 years younger than the mean player in that league.” Ummm, yes, please! Arraez had a similarly impressive stat-line but was in A-ball rather than A+ like Urias. Basabe has the most power of the three but is the least likely to reach the majors. With how quickly the landscape of the position is changing, we may not see as many of these Altuve-types, as more and more teams are starting to crave power in every spot in their lineup. However, it is not impossible for these guys to grow into more power, as we have seen with Betts, Carpenter, Trout, etc. Not to compare them by any means, but I just wanted to remind the reader that these are still growing young men who may not reach peak physical maturity until they approach 26 or 27. The skill-sets that these three, particularly Urias and Arraez, have shown thus far bode well for their futures as they advance up the organizational ladder. Any power added along the way is just icing on the cake, but don’t be too shocked if these guys end up putting up their best years power-wise in the Majors. Schrock, Urias, and Arraez all have such tremendous bat-to-ball skills for players their age that their clubs have to be confident in their ability to start hitting the ball with more authority as they approach their mid-twenties.

Isaac Paredes, 18, and Carlos Sepulveda, 20, Cubs: Paredes gets poor reports for his body, which is not what you want to hear from an 18 year-old shortstop prospect, but his feel to hit is tremendous for someone his age, and Baseball America notes his “SS actions and hands.” Sepulveda is a second-basemen with a similar feel to hit but not the same power projection as Paredes. As mentioned before, MLB teams are looking for more and more power from their middle-infielders, so Paredes seems like the wiser investment here, even before you account for his advantages on the defensive side of things. I think we could start to experience similar ‘hype trains’ with Cubs’ prospects in the coming years, like we have seen with Yankees and Red Sox prospects in the past. Paredes could wind up being tabbed as “the next Gleyber” if he shows up to full-season ball and hits and fields well at short, and while I definitely would not go that far, he seems like a guy whose stock is pointing in the right direction, as does Sepulveda’s.

Eguy Rosario, 17, Twins and Oswaldo Cabrera, 18, Yankees: Want to end with two more guys covered by another TDG writer, Matt Pullman, who discusses Cabrera in Part II of his “Teens Who Rake” series, while Rosario gets discussed in Part III. Both are guys I like a lot due to their ages, positions, and stats, but they did not have any publicity heading into the season and are extremely far away from the Majors. Deep, deep-leaguers take notice, but if your league doesn’t roster more than 250 minor leaguers, I would wait to see what they do next season before investing too heavily. Again, Rosario gets a bump due to his 75-grade nickname, “Eggy.”

Be sure to tune in next week for the beginning of the corner-infield section of the series! Thanks for reading, go Cowboys! 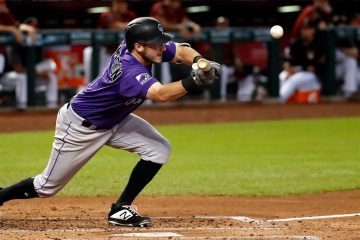 For Whom The Bell(inger) Tolls