I’m a sucker for two things when it comes to dynasty basketball prospects – efficiency and sexy defensive stats. If players are efficient, they’re more likely to get playing time and put up stats. Sexy defensive stats make for a high floor, because the player can be deployed as a useful specialist at minimum.

That’s why when I saw the ease and versatility with which Willy Hernangomez scores and the pace with which Richaun Holmes blocks shots and steals basketballs, I new I had to rip off the baseball writer’s “Digging for Diamonds” column.

Indeed, it does require some digging to find these two on anyones watch list. They only average about 30 minutes per game combined right now, but both have flashed per minute numbers that have piqued my interest.

Hernangomez was a rare clever Knicks draft pick back in 2015 (I say that as a Knicks fan). A draft-and-stash Euro, he was a former teammate of Kristaps Porzingis (perhaps you’ve heard of him), and played for Real Madrid last season. The book on Willy coming into the season was that he doesn’t have the feet to stay with today’s power forwards, nor the shot blocking and rim protection to adequately play center.

Hernangomez does not have great quickness, but his DFG% (field goals defended at the rim) is the same as Marc Gasol’s, which leads me to believe he can plausibly become a starting center if his offensive game grows enough. Offense will be Hernangomez’ fantasy meal ticket, as he currently has a 61.4% true shooting percentage (that would just about match the aforementioned Gasol’s career high from 2009-2010). Hernangomez is a skilled finisher around the basket, making him a potent pick and roll threat, but what is more exciting is that he took three threes on December 22nd. On the year he’s made two out of his five attempts, but if he can knock down threes then he can more plausibly become the scoring, stretch five that coaches tolerate middling defense from.

22, with shooting touch and an 18.37 PER on a Knicks team starved for some youth besides KP? Sounds like a potential diamond at the cost of… well, he’s on waivers in my 16 team dynasty league so not much.

Meanwhile, in Trust the Processville (Philadelphia), Richaun Holmes is another young big (23 to be exact) stuck behind the more highly paid and drafted incumbents. Holmes was selected 37th overall in the draft last year, two spots behind Hernangomez. It would have been easy to completely miss Holmes’ rookie season, but he flashed high end athleticism, blocked shots at a Nerlens Noelesque rate and averaged two and a half dunks per 36 minutes.

He’ll never be confused with Channing Frye as a marksman, but Holmes has flashed competent three point range this year, knocking down 35% of his attempts on the year. He’s currently averaging a whopping three and a half combined blocks and steals per 36 minutes on the year, which means there’s legitimate top 50 upside (or more) should the depth chart clear out for Holmes to get into the mid to high 20’s.

It requires plenty of speculation, but I’m optimistic that Philly will find a way to ship out no fewer than one big in 2017, which should clear the runway for Holmes to capture the requisite playing time for his absurd block rate to matter to us. 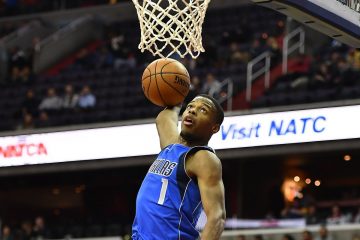