At this point, everyone knows about Lucas Giolito. He’s great. The same goes for Julio Urias, Alex Reyes and Blake Snell. And you definitely should have heard some things about Tyler Glasnow by now (If you haven’t yet, you should probably do that now. I’ll wait). There are a couple reasons why you’re probably pretty familiar with these names. First of all, they’re all really good. Second, they’ve been entrenched on top prospect lists for several years now. As dynasty owners, especially in deep leagues, Top 100 lists are gospel. Most of the time, as soon as young players grace these lists, their asking price are higher than Snoop Dogg on April 20. This makes identifying unheralded pitching prospects hugely important to be competitive in dynasty leagues. By checking the box score and crunching the numbers, you could unearth a future big league starter at a fraction of the price of a top prospect. Since I’m a generous and benevolent stand-up guy, I’m going to help you get started.

Kuhl has managed to stay under the radar, not because of his production, but more likely because he shares a Triple-A rotation with Glasnow and Jameson Taillon (until recently). The six-foot-three righty emerged in the Pirates system last year when he fired 152 2/3 productive Double-A innings. Kuhl put up stellar rates (2.48 ERA, 1.14 WHIP), but his low strikeout tallies (5.95 per nine innings) seemed to cap his ceiling and thus he entered the 2016 season off the radar for many dynasty owners.

So far in 2016, the 23-year-old has improved almost across the board. Kuhl lowered his ERA to 2.15 and has fanned 54 batters in 67 innings. While these numbers aren’t elite by any stretch, it’s definitely an improvement. He has also lowered his walk rate to a meager 1.88 per nine innings, the 19th-lowest mark Triple-A. Kuhl’s numbers have dipped a bit in June after a rocky start to the month. In two June starts, he has give up eight earned runs in only nine innings, and walked more batters (five) than in the entire month of May. If Kuhl can manage to right the ship and reclaim his early season form, he could get an opportunity in Pittsburgh later this summer.

Yet another hurler overshadowed by a more famous teammate. While competing in the same rotation as Giolito for much of 2015, Voth was a super overqualified version of Robin among the dynamic duo. In 157 1/3 innings, Voth struck out nearly 8.5 batters per nine, while maintaining a walk rate that hovered around six percent. This year, Voth has picked up where he left off. In 68 1/3 Triple-A innings, the 23-year-old has lowered his ERA to 2.90 while also increasing strikeouts to nearly a batter per inning.

Voth isn’t likely to blow anyone away with his fastball, but he will undoubtedly be a solid option for the Nationals moving forward. The former fifth-round pick has three above average offerings and has shown a propensity to limit free passes, never walking more than three batters per nine innings in a full season of work. While Voth doesn’t have the same potential as superstar system mate Giolito, he could be a solid producer for the Nats in the middle to the back end of the rotation, maybe even as early as next season.

The Phillies young pitching has to be the envy of several organizations. Their major-league rotation is chalk full of young, promising arms, and in the case of injury (get well soon Vince Velasquez) they have plenty of replacements and reinforcements in the high minors just waiting for the call. Lively is one of those reinforcements, and he has been awesome this year. A former fourth-round pick of the Cincinnati Reds, Lively came to the Phillies organization in a deal for Marlon Byrd in 2014 (poor Reds). Early returns for the Phillies were not great. In 143 2/3 Double-A innings in 2015, Lively carried a 4.13 ERA while posting the lowest strikeout rate of his career (6.95 strikeouts per nine). He returned to Reading to begin the 2016 campaign and reemerged as a top-tier talent, striking out 8.32 batters per nine and lowering his ERA to 1.87 to go along with a 0.94 WHIP.

The Phillies promoted Lively to Triple-A Lehigh Valley in late May. Since then, Lively has continued his shine, posting a 2.08 ERA and 0.77 WHIP in his four starts (26 innings). His strikeouts have dipped a bit, down to a little under seven per nine innings, but if he can find a way to garner a few more whiffs, the 24-year-old Lively could find his name on several top prospects lists in the very near future. Even more impressive, I just went this whole entry without referring to his Lively arm.

When people make jokes about prototypical Minnesota Twins pitchers, Wheeler is the kind of guy they’re talking about. The 25-year-old former eighth-round pick is not going to wow anyone with his blazing fastball or his ability to get whiffs. What he can do, however, is log innings, limit damage, and prevent runs (hot take: run prevention is important for pitchers). Since his first taste of pro ball, Wheeler has tossed at least 130 innings every year. Best known for limiting walks, he received his biggest test when he got the call to join Triple-A Rochester in late 2015. He did not pass this test. Seventy-eight innings and a 6.58 ERA later, it looked as if the sun was setting on Wheeler.

The left-hander began 2016 back in Double-A and dominated. He struck out over eight batters per nine innings (his best career total), en route to a sparkling 1.88 ERA and 0.96 WHIP. In late April, he again received the call to again test his mettle in Triple-A. This time he has fared much better, carrying a 2.15 ERA in 58.2 innings. His strikeout totals are low (7.36 per nine), but they’re an improvement from his last stint in Rochester, and his 5.1 percent walk rate does its share to make up for the missing strikeouts. It’s hard to picture Wheeler as a front of the rotation guy (well, not aesthetically, he’s enormous at six-foot-six and 251 pounds), but he could definitely have value as an innings eater that limits base runners. For the price of “next-to-nothing”, he could be an interesting guy to put on the stash list.

Unlike some of the other entries on this list, Schultz strikes dudes out. Since being drafted by the Rays in the 13th round back in 2013, he has shown a knack for inducing whiffs. Schultz split time across three different levels (including Arizona Fall League) in 2014, racking up 107 strikeouts in 87 1/3 innings. Building on that success, he took another step forward in 2015, averaging 11.2 strikeouts per nine innings in 135 innings of work at Double-A Montgomery. The strikeouts also came with a solid 3.67 ERA for the right-hander.

Also unlike some of the other entries on this list, Schultz walks dudes. In 2013, he surrendered 52 walks in his 87.1 innings, “good” for a disastrous rate of 5.37 free passes per nine innings. In 2015, that number got worse. While Schultz left a trail of strikeouts in his wake, the trail of walks was nearly as long, as he allowed six per nine innings. Thus far in 2016, however, the 24-year-old Schultz has managed to somewhat curb those walk issues. He’s still fanning his fair share (10.2 per nine innings), but he has also limited his walks to only 3.7 per nine. Schultz has tossed 69 nice innings for Triple-A Durham so far this season, so there’s still a question as to whether this adjustment is real or the result of a small sample. If Schultz has unlocked his command and can limit the walks, he could play a major role in the Rays’ future rotation. If he remains just a strikeout guy with a propensity to walk the world, it’s possible he could still make an impact in a bullpen role. 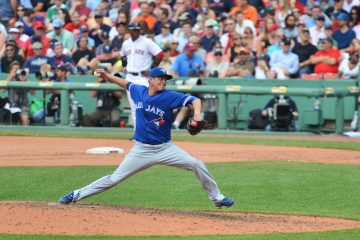