The most valuable commodity in dynasty league baseball is a young player coming off an excellent season. 25 year old Danny Duffy fits the bill. He put up a 2.53 ERA and 1.11 WHIP in 149.1 innings this year. He finished the season ranked #34 among starting pitchers on Yahoo, #52 on CBS and #36 on ESPN’s Player Rater. He also got a ton of media attention because his team made it all the way through the playoffs into the World Series. His owners are thrilled to have him and almost everybody else wants him. Because of his youth and great season Duffy should have a ton of fantasy value right now, right? Yes, Duffy does have a lot of trade value, but he does not offer a lot of real production value moving forward.

Unfortunately Duffy’s fantasy stats are hiding some nasty surprises. His peripherals are not good, in fact they are downright grim. His 2.53 ERA was great but his 4.42 xFIP and 4.31 SIERA are almost two full runs higher. The bad news is that xFIP and SIERA do a great job of predicting the future, so it looks like gruesome things are in store for Duffy’s 2015 prognosis. Duffy got really lucky with a .239 BABIP (.295 is league average) and a little bit lucky with a 77.2% Strand Rate (73% is average). His home run rate was also unsustainably low considering he is a strong fly ball pitcher. All these factors point to dramatic rises in Duffy’s ERA and WHIP next year.

You might counter by saying we should expect Duffy to outperform his peripherals because he pitches in a strong pitcher’s park and the Royals have a great defense. Well, we were told over and over how good they were by the broadcasters during the playoffs. But in reality the Royals’ defensive rank was 12th in the majors, which is only slightly better than average and certainly not enough to make a big positive difference in his ERA and WHIP. Kaufman Stadium does suppress home runs somewhat but it does not in fact suppress runs. As I mentioned in my piece on Yordano Ventura, Kaufman Stadium is a neutral to slightly hitter-friendly ballpark that is not going to bail Duffy out of his messy peripherals.

Despite his lovely ERA and WHIP in 2014 he had a losing record of 9 Wins and 12 Losses. It is pretty hard to have a losing record on a playoff team when you put up a 2.53 ERA. It is unlikely the Royals will win as many games next year as they did this year, so we might reasonably expect Duffy to garner fewer wins himself. However he suffered a disproportionate number of blown saves in games he left with the lead this year and we might see that phenomenon correct itself in a good way next year. In 2014 he didn’t join the rotation until May and only started 25 games. Next year he will presumably get 32 starts if he remains in the rotation the entire season. So let’s budget for approximately 10 wins and 14 losses in 2015.

The biggest problem with Duffy is his subpar strikeout rate of only 6.81 K/9 combined with his poor walk rate of 3.19 BB/9 innings. Both are worse than the league averages of 7.34 K/9 and 2.79 BB/9 among starting pitchers. His 2.13 K/BB ratio is way too low to allow him to have any kind of success over the long haul. A pitcher needs a 3.00 K/BB ratio just to be average. To be a good fantasy pitcher it needs to be 4+ KK/9 and to be an ace it needs to be at 5+ K/BB. An even better way to gauge a pitcher’s effectiveness is his K% minus his BB%. Duffy’s  9.90 K-BB% is well below the league average of 12.07%. You just cannot be a good pitcher at that level. Duffy only struck out 113 batters total last year. That is not going to be good enough to help your team win a championship. Duffy was able to post good strikeout rates in the minors but those have not translated into the big leagues.

Duffy has good velocity, especially for a southpaw. He relies heavily on his 94 mph fastball, throwing it a whopping 70% of the time. He drastically reduced his changeup usage in 2014, choosing to feature the slider/curve instead. FanGraphs classifies all his breaking pitches as curveballs, whereas Brooks Baseball breaks it into a slider and a curve that he throws at the same speed (which is odd because usually a curve is slower than a slider if a pitcher has both). From the hitter’s perspective there is very little if any difference between the two pitches. To elevate his performance to another level, Duffy is going to have to develop an effective offspeed pitch to keep hitters from concentrating on his fastball.

Danny Duffy is widely perceived as a quality young pitcher with a bright future and a lot of fantasy value. Now is the time to sell high. Put him on the market and advertise his stellar ERA and WHIP while touting his youth and prospect pedigree. You should be able to easily trade him for a safer, more proven veteran performer or elite prospect. I think 2014 will go down in history as the best season of Duffy’s career by a large margin. Cash in his value now while you still can!

If you make a trade involving Duffy be sure to let us know in the comments.

More Help For Your Pitching Staff 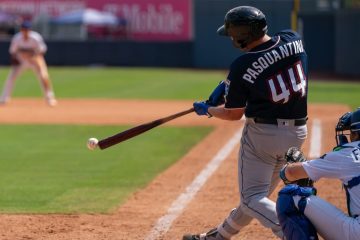 A Look At The Winter Leagues - NL East