#TDGX Transaction Report: Lots of Non-Elite Prospects on the Move

You’ve been following TDGX. You love TDGX. We all love TDGX.  And every week here at The Dynasty Guru, I am going to be bringing you commentary from our flagship experts’ league, directly from the participants themselves.

Tom: “If we have a favorite fantasy profile, it’s someone who contributes in stolen bases without conceding value in other categories. Enter Dexter Fowler and his modest across-the-board contributions. Owning players with that 10-20 stolen base potential means we won’t need to chase after speed specialists.

The cost is Cardinals’ Triple-A outfielder, Stephen Piscotty, and Yankees’ Double-A starting pitcher, Luis Severino. Piscotty, tagged with the dreaded “real life good” tag for fantasy, is a player we like for dynasty. In our trade talks we’ve argued “real life good” is not something that should bother anyone in a deep league, because it means that the player is more likely to earn every day playing time. He’s also a good bet to hit for average, a category you need to win in dynasty — most contenders float to the top of counting stats by virtue of continuing to field lineups of MLB players.

Severino, 20.5 years old, has front-line stuff and a chance to reach the Majors faster than most thought possible this spring. The Yankees have seemingly fast tracked him and it wouldn’t surprise us to see him in the Majors next summer if things continue to go right for him and wrong for the Yanks’ rotation.”

Mike: “In drafting a team full of twenty somethings, the opportunity to sell at the trade deadline isn’t there. A month ago, efforts to shop Johnny Cueto were met with less interest than expected, but the Bloomberg Sports team expressed interest in Dexter Fowler. Initially, my interest in dealing the Astros center field er was non-existent. With just enough outfielders to field an active roster, an everyday guy held more value for me than other teams. However, an offer leading with Stephen Piscotty proved too much to resist — especially when Luis Severino was dangled as a second piece. Having scouted both in person this season, Piscotty reminded me of A.J. Pollock while Severino is a mid-90’s velocity pitcher with excellent feel for a change-up. Of pitchers scouted in 2014, he’s one of the top-five I’ve seen.”

Tom: “We don’t necessarily love the value of trading three differentiated prospects for a good-not-great pitcher, but consolidation is the name of the game for the active dynasty owner. We like buying low on Homer Bailey, who has maintained the excellent velocity that he showed in 2013. He increases our chances of competing next year while providing solid future value. Freeing up a couple of rosters spots allowed us to make investments in several relievers with a shot to emerge as closers.”

Mike: “J.P. is getting two nice pieces in this deal who unfortunately didn’t make the cut on our 20 keeper list. In Maikel Franco we are getting a prospect who is close and can play corner infield, which is a position where we were looking acquire some depth. Franco fits our team of “Misfit Toys” along with Jorge Soler, Starlin Castro, and Jason Heyward. He’s still only 21 years old and while he struggled through the early part of the season, he’s finding his stroke again, hitting .352/.370/602 with three homers in 22 July games. Hopefully he’s a nice buy low and not a bust.”

“Black wasn’t able to find the plate, and Greene had two starts last week. Looked better as an idea then. Now? Greene? Meh.”

“Admittedly, Vazquez may not stick around long. With Mike Zunino, Christian Bethancourt and J.R. Murphy, Team ROTOscouting’s catching situation is set for years to come. However, with $60 FAAB dollars left and little to spend it on, its worth cycling through young players until a couple click this time of year. It’s better to stash, hold and cut than miss on a keeper quality talent.”

“Navarro is a player who hit at every minor league level, yet slipped through the cracks. In a league as deep as TDGX, any player with a .307/.373/.453 triple slash line deserves to be owned. Needing an active outfielder to replace the recently traded Dexter Fowler, the 28-year old 1B/OF was a no brainer at this point in the season.”

“I had two DL slots open up when Josh Beckett and Dillon Gee were activated recently, so I grabbed these two injured contenders for the closer’s role on the south side of Chicago. Neither one of them is all that great, but Saves are Saves. I like Putnam as the guy who has the better chance to grab the role and hold on to it into next season and beyond. I think both of these guys are better options than Jakob Petricka, Javy Guerra and Ronald Belisario. If either one of them regains the closer slot it will be a nice cheap way to gain a valuable asset.”

“Loup is bringing some quality ratios to the table, and with a decent lead in Strikeouts, we thought it wise to bring in a solid arm for our starting lineup. With Grilli now third in line for saves in Anaheim, it seemed a wise drop.”

“With Daisuke Matsuzaka hitting the disabled list over the weekend, I went looking for a pitcher who could potentially provide positive value this week rather than just plugging a pitcher in the minors (or worse, Colby Lewis) into that spot in my lineup. Noesi has pitched well in his last two starts, so hopefully he’s reasonable this week against Detroit.”

“He’s not “the guy” today, but he looks to be second in line and has the advantage of throwing from the right side as compared to closer-du-jour, Jake McGee.”

“LaTroy Hawkins’ 2014 season is truly incredible — who would have thought a closer could survive in Colorado with so few K’s? He’s on borrowed time, however, and while we’d prefer to own Ottavino, Brothers could still claim the closer-of-the-future tag he’s seemingly owned for years now.”

“The Marlins gave up a compensation pick to get him, which is weird, but we can infer that they like the guy. If Cishek is traded between now and our keeper deadline, he’s our best guess at Miami’s next closer.”

“Ottavino and Brothers are more likely to become the Rockies’ next closer, but it’s rule-five draft find, Tommy Kahnle that has been the bullpen’s most reliable arm.”

“With Matzek running out of eligibility in our minors, we had a free spot, and Williams is pretty darn buy low at this point. Heck, being a Yankee Fan played a small part. Boxberger is a quality arm that I wish we had back.”

“I had the chance to see Gregor at Lancaster a bunch of times this season, and despite having done most of his breaking out this season in a hitter’s paradise he’s legitimately developed into a really interesting bat. Here’s some “before” video of him in the Cape League a couple seasons ago, versus some “after” video I took of him a couple weeks ago. The Astros have made great strides in helping him to ditch the awkward stance that reduced his functional power throughout college and Lo-A by spreading him out for greater balance and momentum-generation. He’s doing a much better job now of using his lower half and hips to help tap into his brute strength and drive the ball. His swing is highly leveraged and his in-game power is virtually non-existent if he’s not pulling the ball, and that’s a profile that will surely be tested in the high minors. And indeed he has unsurprisingly struggled to adjust of the bat at Double-A. But his control of the strike zone is quite advanced, and he does a fine job getting himself into consistent hitters’ counts. That’s an invaluable trait which should allow him the opportunity to continue his positive development in the season’s second half. He’s far from a finished product and still a very high risk, bat-only profile. But if he can continue to show an ability to bring his plus raw power into games at AA he’ll be worth taking a gamble on in deeper league minor league drafts this winter.”

“With Tanaka going to the injured list, we had a free spot for a minor leaguer. De Paula was a hot ticket last season, and he had a great first outing in the Padres system. Maybe he IS a 7th inning guy, but last year he was the next big thing. We’ll see.”

“Scraping the bottom of the barrel… nothing to see here, folks.”

“Mella entered this season with a fastball regarded as one of the nastiest in all of the minor leagues, but the combination of him being eons away from the Majors and the funky, unorthodox delivery he employs had him virtually off the national prospect map. Well, he’s still eons away from the Majors, and he still has a funky, unorthodox delivery. But he also has two potential plus pitches and a change-up that projects to solid-average. Regardless of mechanics that’s a starter’s arsenal, and multiple scouting reports from the season’s first half confirm he’s got the tool kit to start. His fastball is a heavy mid-90’s offering with true 70 grade potential, while he’s made great strides in starting to refine a potential 60-future breaking pitch. He’s currently on the shelf in A-ball with an undisclosed injury, but I’ve been told it’s not an arm injury that presents a serious threat to his development. He’s a very deep league consideration at this point and a “follow” in anything shy of a format as deep as TDGX. But he should make a significant jump up the Giants’ organizational rankings this off-season, and he may be an intriguing ground-floor investment this off-season if you have the stash space.” 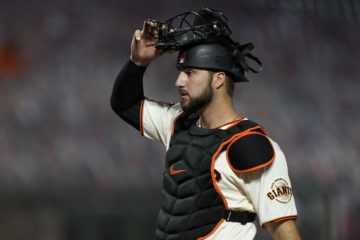 Is James Ramsey Worth Your Time?

#TDGX Transaction Report: Lots of Non-Elite Prospects on the Move