I’m taking a break from #TDGX this week to briefly discuss four minor-leagues names I’m particularly higher on than the majority — I see each of these players making significant strides and rising on prospect lists next winter. The first is a third baseman who is buried but not out, the second and third are Hunters, and the fourth is a Cubs pitcher not named C.J. Edwards. (Yes, they have those too.)

Since letting Aramis Ramirez walk via free agency, the Cubs have employed Josh Vitters, Ian Stewart, Cody Ransom and Donnie Murphy, with Luis Valbuena and Mike Olt splitting time in the present. Cubs’ fans are praying that Olt is the short-term answer and 2013 first-round pick Kris Bryant is the long-term plan, but lost in the prospect shuffle is Villanueva, 22, a 2008 international free agent (Rangers) from Mexico who the Cubs acquired for Ryan Dempster (*chuckles*)  in 2012. Bryant’s bat is potentially elite, but it’s Villanueva who owns the organization’s best glove. Not to be outshined by his teammates, the third baseman hit .261/.317/.469 last year, including 62 extra-base hits (19 home runs) across 155 games in Double-A. He’ll never likely hit for a high average, but his above-average power should play at the major-league level, in conjunction with his stellar handy work at third. He’s currently manning the hot corner in Triple-A, but we could see Villanueva at the next level by the end of 2014 — possibly before Bryant arrives. If Bryant can’t handle third and is forced to either corner outfield, Villanueva, not Bryant, could the Cubs next third baseman.

The Orioles have amassed an impressive trio of arms since 2011, including first-round selections’ Dylan Bundy (2011), Kevin Gausman (2012) and Harvey (2013). Harvey’s ceiling isn’t on the same level as Gausman or Bundy, but the potential for another front-line starter in Baltimore is in the early stages of development. I recently acquired Harvey in the ninth-round of a second-year dynasty league draft, so there’s still some time to buy low on the Orioles third best pitching prospect. The 22nd overall pick out of North Carolina prep school made eight starts in in 2013, striking out 33 batters in 25 1/3 innings of work. The 19-year-old possesses a fastball with late life that sits anywhere from 90-95, but his best pitch is a monster curve. His changeup could use the most work, as well as his mechanics, but he has all the makings of a No. 2 or No. 3. Harvey will start the year in Low-A ball, where he’s already made one start (6 IP, 4 H, 0 ER, 0 BB, 5 K). The window to acquire the young right-hander could close very quickly.

Another Hunter. Stop naming your kids Hunter. Enough already. No more Hunters. Dozier, 19, was the Royals’ first-round selection (No. 8 overall) in the 2013 draft. The shortstop was considered a first-round talent, but a top-10 pick was collectively considered a reach. Dozier paid no attention to the haters, hitting better than .300 with 37 extra-base hits and more walks (38) than strikeouts (37) in 69 games. As he demonstrated in his first year of professional ball, Dozier has a great eye at the plate and the potential to hit for solid average and plus power. The 6-foot-2, 220-pounder could be someone who regularly provides 20 home runs at the major-league level, but he’ll likely do it at third and not short, where his fantasy value would be its greatest. Dozier is already on the fast track, and he could get a taste of the Double-A life sometime in 2014.

With Javier Baez, Bryant, Albert Almora and Jorge Soler the talk of Chicago, Johnson is quietly taking strides to rival C.J. Edwards as the Cubs best pitching prospect. Unlike Edwards, Johnson’s future role with the team is clear: he’s a starter. The 43rd overall pick of the 2012 draft, Johnson split time between the two low-A levels in 2013, striking out 124 batters in 118 1/3 innings and allowing only five home runs. Johnson has an ideal pitching frame, and his arsenal includes a fastball that generally sits in the low 90s and a curve that’s among the best in the organization. Johnson’s changeup will need some fine-tuning, but his arm is one that is easy to project – he could be a fine No. 3 or No. 4 starter at the big-league level once/if his command comes. Johnson, 22, is currently sidelined with a hamstring injury, but he’s expected to join the Double-A team later in the season. Don’t sleep on him. 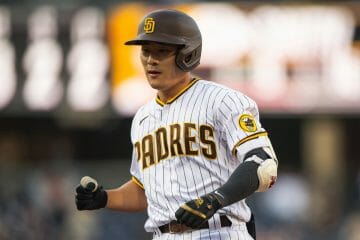