‘Round this time of year I like to begin my off-season planning by taking a few minutes to check out some of the better second-half performances of the season by unheralded players. Identifying your starter list of potential sleepers for the following season as early as possible allows you to track off-season moves with those players in mind. By the time spring training comes along you’re then able to winnow your list down to a coherent watch list leading up to draft day. I like to spend time on starting pitching in particular, as it’s not only a good exercise to identify potential late-round draft targets, but for those in head-to-head leagues in particular it’s also a chance to get a head start on figuring out potential early season streamers. So to this end let’s take a look at a couple pitchers who managed to raise an eyebrow or two of mine and see what if anything 2014 may have in store for them.

Tyson Ross, RHP, SDG. Ross came up as a relatively unheralded prospect in the Oakland organization, and after a couple brief stints with the big club in 2010 and 2011 the A’s gave him a longer look in his Age 25 season of 2012. It went…not so well. Over the course of 18 appearances (13 starts), Ross posted a ghastly 6.50 ERA and 1.81 WHIP. While his FIP checked in at a slightly more palatable 4.80, there was not much to be encouraged by in his peripherals. He whiffed about five and a half batters-per-nine while walking just over four and a half, and though he was able to generate groundballs on half of his balls in play his flyballs left the yard at a double-digit clip and he yielded 96 hits in just 73 1/3 innings. The A’s had seen enough, and they shipped him off to San Diego in a widely ignored trade last offseason.

The Padres had a plan though, as they tweaked his mechanics in spring training, boosted his slider usage, and continued to move Ross in the direction of all but scrapping his third pitch change-up. All Ross did in response was quietly emerge as one of the National League’s most dominating starters down the stretch last season. Over 13 starts and 80 inning in the second half of 2013 Ross posted a 2.93 ERA (2.66 FIP) on the strength of 9.56 K/9 and 2.59 BB/9 walk rates, while inducing groundballs at the 5th best rate in all of baseball (57.3%). Most remarkably, Ross was largely able to accomplish this turnaround on the strength of one pitch: his slider. Ross got hitters to swing and miss at over half the sliders they offered at in 2013, which made it the second most unhittable slider in baseball behind Patrick Corbin’s. Indeed, while his 94 MPH fastball graded out as nominally below-average (-0.27 runs below average/100), his slider’s 4.43 runs above average/100 made it the most valuable in all of baseball over the second half. He threw the pitch over 34% of the time during this stretch, and it remains to be seen if his elbow and peripherals can sustain that kind of volume over a full season. But Ross sure looks like an interesting sleeper pick for next season for those owners interested in finding out.

Brad Peacock, RHP, HOU. Peacock was a popular helium prospect entering 2012 after a breakout 2011 campaign that culminated with his inclusion as one of the centerpieces in the empty-the-farm trade the Nationals made with Oakland for Gio Gonzalez. Peacock headed west on the heels of a season in which he posted a 2.39 ERA, 0.99 WHIP, 10.9 K/9 and 2.9 BB/9 across 146 2/3 innings of AA and AAA ball. Though scouts questioned whether his stuff would play at the highest level on account of average control and the lack of a true out pitch, he was widely expected to get a shot to take a job in the Oakland rotation and run with it at some point in 2012. That didn’t happen, however, as the Pacific Coast League proved too mighty a challenge for a pitcher with flyball tendencies and mediocre control. While his 6.01 ERA at AAA Sacramento was fueled by terrible BABIP (.340) and strand (60.4% LOB) rates, he failed to crack the big league roster and was promptly shipped to Houston as part of the trade for Jed Lowrie this past offseason.

He broke cap in the big league rotation, but after a pretty terrible April  he was shuttled back down to the farm and tasked again with harnessing his command in the PCL. He pitched well over 79 innings, posting a 3.36 FIP and holding batters to an 85 OPS+. With the bar in Houston being…not the highest this past season, he was able to earn a second-half trial back in the Astros’ rotation. Over 9 starts and 54 2/3 innings in the season’s second half he managed a 3.64 ERA (3.89 FIP) on the strength of almost a strikeout-per-inning and a reasonable 3.31 BB/9 rate.  On the other hand, he did remain prone to the long ball (10.8% HR/FB) and appeared to benefit a bit from lady luck to the tune of a .255 BABIP. Still, what’s most notable about Peacock from a development standpoint is that he’s shown a consistent ability throughout his career in the high minors to adapt and succeed at each level after an adjustment period; he thrived at AA in 2011 after an initial struggle in 2010, and he tamed the PCH in the first half of 2013 after pitching poorly there in 2012. Given the history, his work down the stretch last year thus warrants some attention. He’s not necessarily someone to toss onto your sleeper list in bold letters right this very minute, but he’s definitely the kind of guy you want to watch closely in spring training as a potential back-end flyer or, at worst, an early season match-up play. 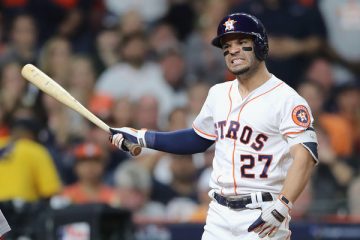 Dynasty BaseballGeneralWhat To Do About...