Up the Middle: Rougned Odor

If only his name were something bland like Joe Smith, he might still be flying under the radar. Instead, Rougned Odor is enjoying a breakout season in 2013 and dynasty players are taking notice to more than just his unusual moniker. The 19-year-old second base prospect for the Texas Rangers played 100 games in the Carolina League this year before being promoted to Double-A in early August. He was joined by shortstop prospect, Luis Sardinas, who’s a quality middle infielder in his own right. Yes, the Rangers are that stacked up the middle. If it’s good enough for a major league ball club, it’s good enough for me. So while I already have several middle infield options in my farm system, I’ll be looking to acquire Odor before it’s too late.

Odor’s High-A numbers in 2013 were really impressive given his age. He ranked in the top ten in the Carolina League in doubles (33), stolen bases (27), average (.305), and slugging percentage (.454) before his promotion. For the sake of comparison, Indians prized prospect Francisco Lindor hit .306, slugged .410, and stole 20 bases in about 50 fewer plate appearances. Granted, Lindor walked more and struck out less, but I guarantee that he’ll also cost you a bunch more since he’s already made appearances on some mid-season top ten lists.

The promotion to Double-A hasn’t slowed down Odor. He made his presence felt with walk-off singles in back-to-back games over the weekend. In his first 16 games, he’s slugged .486 with 4 doubles, 3 homers, and a stolen base. He’s the youngest player in the Texas league at the moment and while last year he faded down the stretch, those solid early numbers in Double-A are a sign that he’s built up some endurance. I’m a fantasy player, not a scout, but everything I read about Odor seems to be consistent about one thing: he can hit. His 37 doubles for the year rank in the top ten for all of minor league baseball. So while he may be smaller in stature and not as talented a defender as Profar or Sardinas, for fantasy purposes he is somebody I’m interested in due to his premium position and good offensive numbers. The fact that his left-handed bat seems to get better at each level (his slugging percentage has jumped almost 50 points in each of the last three years) is a great sign.

To be honest, I don’t care whether the Rangers have “too many” middle infielders or whether Odor will end up as a second baseman or a shortstop for another team. These types of situations tend to work themselves out and Odor is probably at least two years away anyhow. What I’m looking at instead are his small but steady improvements in walk rate each year and consistently solid offensive numbers despite being younger than his competition at each level. He might not end up being elite at any one aspect of the game, but he strikes me as the type of well-rounded player that can quietly contribute in more than one category, and those are the types of players that help us build a winning team. He won’t receive anywhere near the hype of Jurickson Profar or even Lindor for that matter, but that’s a good thing for those of us looking for good values when assembling our dynasty rosters this offseason. If Odor continues to improve and has success at the Double-A level in 2014, his name will be more than just a test of our pronunciation skills. 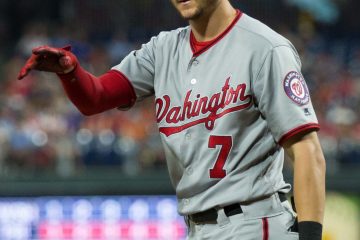 Keeper Conundrum: How Many Altuves?

Up the Middle: Rougned Odor