What To Do About… Hyun-Jin Ryu

It’s only natural that as the resident Dodgers fan here at The Dynasty Guru that I would write about the Dodgers other Rookie of the Year candidate: Hyun-Jin Ryu*. Entering the year there were a lot of questions about Ryu and the type of fantasy value he could provide. Much of this was because the Dodgers had “too much pitching” (how’d that work out?) and we weren’t quite sure if he might be shifted to the bullpen to begin the season. As it turns out, the big dollars the Dodgers invested in Ryu meant he’d have a starting spot out of the gate, and despite a less than ideal fastball, Ryu has been the Dodgers second best pitcher thus far in 2013, besting fellow free agent signee Zack Greinke and making a case for the all-star team.

*not how this article actually came to be

So…how did this all happen exactly? After all, before the year started some were saying Ryu profiled better as a 4th or 5th starter or possibly even in the bullpen and now he’s recording a 2.82 ERA (3.50 FIP), with a 19.7% strikeout rate and a healthy 1.48 GB/FB ratio. Well, he’s got a few things going in his favor. Early on in the season it was his first time around the league and that generally gives pitchers an advantage on hitters. Add in the fact that Ryu’s best pitch is his change up, and that’s another advantage, as hitter’s are able to adapt to change up first pitchers the more they see them. The other thing going in Ryu’s favor was that his fastball was a little better than advertised during the early portion of the season. One of the reasons that analysts such as Keith Law were tepid on Ryu was because the fastball wasn’t good enough (in regards to velocity) to make him more than a 4th starter. However, with a fastball in the 91-92 MPH range, he’s been effective, to say the least. It would be a concern if that velocity started to drop though, as less a slower fastball would have a significant impact on the effect of his change up in addition to being a more hittable pitch. See the chart below (courtesy of Brooks Baseball) to see Ryu’s velocity by month:

Another thing worth noting for Ryu is his massive platoon split. He’s sporting a 584 OPS-against when facing right-handed batters. Facing lefties though? 836. So if you’re a Ryu owner like I am, you might want to check and see if the lineup he’s facing is loaded with lefties. As a change up artist it’s not entirely surprising to see such a reverse platoon split, but it’s worth noting for matchup purposes.

So what exactly to make of all this? It’s my suggestion that if you invested in Ryu in your pre-season draft or were able to jump on board early that a trade would net you a healthy profit. He’s already given you plenty of earnings on the season, and the gap between his ERA and FIP is a bit concerning (not to mention the Diamondbacks are smacking him around as I type). On top of the that, his second and third time through the league is only going to make it tougher on him (and your fantasy team). None of this is to say that he won’t be a solid pitcher. That’s exactly what I think he is. But if someone in your league is desperate for help, you might be able to sell them on Ryu’s shiny ERA and impressive win total. I wouldn’t go out of my way to move him, but if you’re in the position to move pitching, he’s a guy I would consider moving before others.

All stats outside of the table come from FanGraphs.com 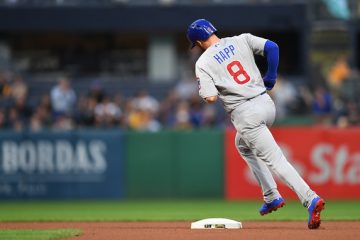 TDG Roundtable: Players We Got Wrong In 2020

Have I Told You Lately Not To Give Up On Jason Heyward?

What To Do About… Hyun-Jin Ryu