If you follow me on Twitter (at @dynastyguru), you’ve probably seen me run my #streameroftheday before. It’s something which I started in the first half of 2012 and kept up throughout the whole season – and honestly, I was pretty successful with it, given the parameters. Over 130 starts last season, my streamers had a 3.79 ERA, 1.26 WHIP and 590 K in 748 2/3 IP, compiling 54 wins in 130 starts (for a 42% win percentage). It looks something like this:

Tomorrow’s #streameroftheday is Justin Grimm at SEA. With Matt Harrison hitting the DL, Grimm gets his shot at Safeco. Not a bad deal.

So about those parameters..

My intention with this was not to just copy the other people out there who post streamers in their columns, and throw out guys who are usually taken in most leagues. Anyone can throw out a pitcher who’s owned in 30-40% of leagues and expect decent results, but those of us in deeper mixed leagues (12-16 teams) are usually out of luck with those recommendations. Hence, my parameter is simple — single digit ownership. If a pitcher is owned in more than 10% of leagues, he is ineligible. And as you can tell by some of the names I’m recommending, it requires a little deeper digging.

What I’m going to be doing with this during the season is putting the daily recommendations on Twitter again, and throwing up a summary of the week’s activity every Friday at Baseball Prospectus (in the blog section). It doesn’t matter whether you are a subscriber or not (but you should be, it’s really fantastic and I say that as someone who subscribed for years before actually writing there), as the blog posts will be free for all. And to give a little example of what that will look like, here were this extended week’s #streameroftheday results:

And here is the detail behind it:

What follows the detail will be an explanation of the results. A look at which guys let me down this week, and which helped set the bar high. For this first brief stretch of the season, some familiar names gave solid performances. Dillon Gee was someone who I used a lot in this space while he was healthy last year, and was very good against the Padres (though not so good at Philly in his next start, which I did not recommend). The AL West soft tossers were the biggest disappointments, as throwing Joe Blanton and Joe Saunders in pitchers’ parks didn’t quite work out the way I envisioned. Same with Lucas Harrell, who I won’t lump in with those two, but still burned me nonetheless.

The first part of the season is always the toughest to stream, so while the results weren’t especially encouraging overall (except for wins which were at a solid 50% clips), as pitchers and teams begin to show more of what their true level of performance might be, it will get easier to predict. For example, Oakland was a team I thought could be exploited as a match-up, but I have used streamers against them three times and gotten my three worst results out of that. Consider that lesson now learned.

So hopefully this all will be helpful to you over the course of the season. It’s something which is meant for leagues of all types, despite the format. Streaming can be just as useful in a dynasty league as it is in a redraft league, though it may slightly change the available pitcher pool (fewer rookie/young starters, more veteran guys). Try it out, I think you’ll like it. 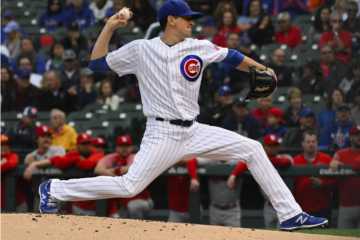