Putting My Money Where My Mouth Is

We’ve been over this before – I play in WAY too many leagues. In fact, this year, that number is officially 14. And they run the gamut in terms of formats. There are seven dynasty leagues, three pure redraft leagues, six head-to-head leagues, and two points leagues. I have leagues on four different host sites – though half of them are run through Yahoo! I have OBP leagues, I have 6×6 leagues and even one 7×7 format.

But through it all, I have a good number of overlapping players. Of course, that’s a given when you own 288 different players across 14 teams – but what I’m going to go through today are the players that I own in more than three leagues to show you how much I actually believe the advice that I’m doling out. More than half of these leagues are either for jellybeans or they are expert formats, so no messing around. Not surprisingly, these names should not shock you if you’re pretty familiar with my writing.

So here they are, the players I own most in 2013, kicked off by the only player who I own on more than half of my teams:

When you generally wait on saves like I do in drafts, there’s usually one guy who’s at the bottom of the pile among likely closers that I end up getting on a bunch of teams. Last year it was Addison Reed, and that worked out pretty well for me – considering I got him with one of the last picks in each of my leagues. Madson has been just a touch more expensive than that, but not much. I really think he’ll be fine within a month or so, and still think he’s closing in LA by Memorial Day. Plus, if I’m wrong, I didn’t pay much for him anyway.

Shocking, I know. There are few people who carry the E-Jax torch so loudly and proudly as I do, and I still can’t quite figure out why. He was the first player on my 20 Favorite Endgame Targets piece at BP last week, and here’s an excerpt of what I wrote: “When owners think of Jackson, there’s too much focus on the fact that he’s never taken that step forward to match his former prospect status, and not enough on what he’s become—a very solid starter who is getting better…He may never “break out,” but he doesn’t need to in order to return value at this price.”

I was a strong advocate of Hanley as a top-15 player this year, before he hurt his hand. Although, I did draft him another two times after the injury was fully diagnosed and the timetable was established. Of course, by that point, he was being taken outside the top-100 in a draft and I was able to snag him for $17 in a redraft auction. I still think he’ll be very good when he comes back.

Same as Hanley – except Ortiz gets underrated because of his age anyway. He can still hit, and he could be back as soon as mid-April. At the prices/draft spots he was going at, I couldn’t resist.

Werth’s 2012 season was not the type of season we usually expect out of him, except for the fact that he missed time due to injury. The broken wrist cost him three months of the season, and then his power upon his return. However, what he also did was post the lowest strikeout rate of his career – leading to a .300 average. I had him ranked as a top-40 outfielder both in redrafts and dynasty formats, so I had to pounce when appropriate since he’s being taken outside of the top-50.

Like you really need a reason as to why I would own these guys in a bunch of leagues.

I’ve been saying this since the end of last season: if I have to own anyone in the Detroit bullpen, give me Benoit. He’s got the best combination of skills and health in the entire pen, and even though Jim Leyland has made some comments about him bouncing back after pitching on back-to-back days, I’d rather buy the best reliever and see if I can squeeze a few saves out of him, then run after a bad pitcher who might have a slightly better shot at saves.

Again, another thing you’ve heard me say over and over and over again in relation to a number of different players. Any time you can own a catcher-eligible player who isn’t playing the position (or isn’t playing much at the position), take him. Napoli should be logging most of his time at first base, especially in light of the hip injury, and he’s been a nice discount in a few leagues.

When I ranked Bailey as a top-40 starter in dynasty leagues, it reflected that I not only thought that his step forward in 2012 was real, but that there may be even another step forward before he’s done improving. Of course, his current price in the market suggests that he’s not quite that 2012 version. I understand the skepticism, since he’s burned many owners before, but we’re also talking about a former top-10 prospect in baseball.

The PED backlash against Melky is causing him to drop in drafts, and he shouldn’t be. As the likely #2 hitter in that Toronto lineup, he should put up numbers across the board, including potentially elevated HR totals while playing half his games in Rogers Centre. Sure, his BABIP was a little fluky last year, but he doesn’t need to hit .346 to hold serious value.

And if you’re wondering where some of my other particular favorites are, here’s a list of all players I own in three separate leagues: 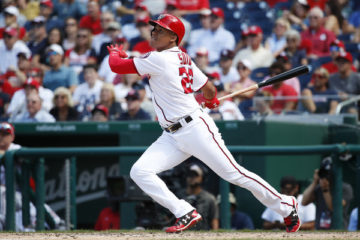 Wait, These Guys Are Still Prospects?

Putting My Money Where My Mouth Is