I’m taking a break from putting together the rankings package, that will start to trickle out on January 14th, to preemptively answer a question which will likely come up when list posts. Why is Bruce Rondon, the supposed Tigers closer, not on the top-150 list? The answer to that has something to with Rondon himself, but it’s mostly attributable to the value of relief prospects in the context of a long-term league.

First, the Rondon-specific reasoning. The biggest reason why I do not have him ranked is that even if he’s given the Tigers’ closer job out of spring training (which I don’t think will happen, but that is a smaller point), I don’t think he’ll be very good at it. This is not an Addison Reed situation from last year, where it was a pitcher who was dominant throughout the minor league season and had the scouting reports to match. Rondon throws really really hard, but he’s also a very large man who has poor control and no legit secondary pitch to speak of. So while he may get the opportunity at some point, I’m not optimistic.

The larger issue is how to value the relief prospect overall. I’m not one to shy away from talking about mistakes that I’ve learned from as I go through this process year after year, and one from last year was my ranking of Addison Reed. On my pre-season prospect list, I ranked him 30th, as I thought he would be the next dominant closer in baseball — and knew it was an aggressive ranking at the time. The thing is, my opinion of Reed hasn’t changed all that much. I still think he will be a pretty dominant closer, and it’s reflected in my RP rankings, but Reed should not have been a top-30 prospect last year. I was putting too much stock in the path he had to the closer job (which ended up being right, as he recorded 29 of them).

The Joel Hanrahan trade which surfaced on Saturday afternoon reinforces why closers are always going to be less valuable in a dynasty league format than they are in redraft (or even many keeper) formats. Over the last two seasons, while Hanrahan has been the Pirates’ closer, he’s had 76 saves (5th in baseball) and a 2.24 ERA with a 9.0 K/9 — and he may not have a closer job next year due to circumstances beyond his own control. And if he does get the job, it leaves another potential top-20 closer in Andrew Bailey out to pasture. I’m already taking into account reliever performance volatility when doing my rankings, but the other thing which needs to be factored in is role volatility. The second is the more frustrating of the two, as Kenley Jansen and David Robertson owners can attest to — Robertson was the best reliever on the Yankees last year but was passed over for saves in favor of Rafael Soriano, and Jansen is amazingly looking up the Dodgers’ depth chart at Brandon League.

Now, for this year’s rankings, the only pure relief prospect I have ranked in the top-150 is Mark Montgomery of the Yankees (I don’t consider Trevor Rosenthal or Marcus Stroman in that category, as they could still be starters), and he’s in the back third. Funny enough, his stats from 2012 were almost as good as Addison Reed’s 2011 numbers:

So while it’s true that Montgomery has a much more difficult path to a closer job — not only is Mariano Rivera still locked in for 2013, but David Robertson is ahead of him for saves beyond that — that’s not the main reasoning behind his low ranking. The pressure is on any relief prospect to be elite, otherwise he is likely to end up with no fantasy value in a standard league. It’s similar to a catching prospect, who is not offensively gifted enough to be viable at another position — they only have one trap door to fall through for fantasy irrelevance. On the other hand, if a starting pitching prospect fails in the rotation, his first trap door only leads down to the bullpen, where they can still have plenty of value. It’s the same reasoning why shortstop prospects are so valuable. They can move down the defensive spectrum (usually to 2B or 3B) and still stick at a somewhat shallow position. And when you’re collecting talent on your minor league roster, because of the risks inherent in the prospect world, you want a player who has as many paths to value as possible. 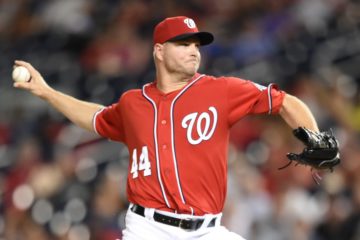