For those of you who’ve been around these parts for a while, you may remember the initial dynasty league I agreed to participate in at the beginning of the off-season for the purposes of writing up a full draft (and the thought process that went into it) on this site. We had the minor league draft through the boards back in November, and I wrote it up in a few different posts (Rounds 1-3, Rounds 4-6, Rounds 7-9, Rounds 10-12, Rounds 13-16, Rounds 17-25), but now this past Wednesday night was the marathon major league portion of the draft.

The draft started at 9:30pm ET, and by the time 1am rolled around, I still had a spot or two still left to fill. On top of this, I was running a fever the whole night and it ended up being the start of one of the worst viruses I’ve ever had in my life (that I’m just recovering from now). So by the end of the draft, I was mildly delirious and my gchat words were being used as internet fodder by a fellow TDG writer.

Over the course of the next week or two, I’m going to write up the entirety of the 25-round major league draft and then examine my full team at the very end. But from the outset, I will say that I’m very happy with how this whole draft turned out – and though my team certainly has some weaknesses, it’s a 20-team league, and that’s bound to happen. My strategy from the outset was that I was going to secure the offense first with firepower, and then build my pitching staff with depth. And in the end, I stuck to that plan exactly.

But first, before we dive into the draft, a few reminders about the context of the league, as it’s not a straight-forward format. It is a 20-team 7×7 H2H league that uses all of the standard 5×5 categories, plus OPS/Total Bases for hitters and Quality Starts/Holds for pitchers. The active rosters are one player per position (OF are broken out by LF/CF/RF) plus a Utility player on offense, and nine pitchers (2 SP, 2 RP, 5 P). On top of that, there are 7 reserve spots, 3 DL spots and 25 minor league spots (which were all already filled). We were given strict instructions that if you drafted a player already on someone’s minor league roster, we would not be going back to reverse picks, so it would just be considered a party foul and we’d move on. All in all, it’s a very deep league with an active lineup that skews a little towards pitching and deep minor league rosters (500 total prospects are rostered). Oh, and by the way, I’m the Minnesota Twins.

So here is a review of rounds 1-3 of the draft. I’m going to use the same format as my write up of the minor league side of the draft – looking at who I picked and why (along with others I was considering) and who the best/worst picks of the round were (mine excluded). Hopefully this helps with the preparation for your own dynasty league draft.

My selection: At the outset of the draft, I was crossing my fingers that either Harper or Stanton would fall to me at #10. When they were both gone in the top-5, I just started checking names off my list to see who would make it to me. It was almost Matt Kemp, who went a pick earlier, but in the end, there’s no passing up the best of the stud first basemen, especially when total bases and OPS are extra categories. Joey Votto should be a top-7 pick in similar formats, over McCutchen and Cano, who were both ranked higher than Votto for standard leagues.  [Other considerations: Prince Fielder, Justin Upton]

There’s absolutely no way Cabrera should last to the sixth pick in ANY draft, so grabbing him here was a king-sized coup for the Pirates. He’s a stud, he’s in his prime and he will qualify at 3B for the foreseeable future. Matt Kemp gets a similar statement, but slightly understated – he was a top-6 talent in this draft and should have been taken as such. There’s nothing wrong with Andrew McCutchen, but reaching for him over Cabrera and Stanton is a mistake I think the Brewers will end up regretting in the end. Josh Hamilton is exactly the kind of guy who usually goes for great value in a dynasty draft, but instead got taken a little too early for my tastes. Though with that said, it was on the snake, and he certainly wasn’t getting back to this owner.

My selection: For about three minutes, I was fully convinced that Hanley was going to fall to my spot and I was going to get the bargain of the entire draft. In the end, it was another owner’s bargain to be had, but I still grabbed a middle infielder who provides production everywhere at a very weak position. The real reason I went with Pedroia over Jones, even though I do have Jones ranked higher in almost every circumstance, is that with the roster settings, a 2B (where 20 are started) is much more valuable than an OF (where 60 are started). This is why you always need to pay attention to your settings when making draft/roster decisions – many leagues are anything but standard. [Other considerations: Adam Jones, David Price]

The first surprise of the draft was seeing how far Pujols was dropping. Yes, he’s aging and coming off a down year for him, but he should have been a top-15 pick, easy. However, this was quickly topped by the free fall of Hanley Ramirez – who took the Pujols situation to another level, given the depth of the league and his SS/3B eligibility. Again, I was super bummed that he went the pick before me. I have gone on record that I’m a believer in Encarnacion, but over Pujols, Longoria and Beltre? That’s a little drastic for my tastes. I don’t need to touch again on my beliefs about closers in dynasty formats. Kimbrel may be the best of them, but he still falls prey to their whims. In the fourth round, I get it, even though I certainly wouldn’t be the one doing it. In the second round, it’s sheer insanity. Saves are saves, people.

My selection: It had to be done. Although I don’t consider myself to be in the Paul Sporer class of Allen Craig believers, I do believe he’s a top-30 type talent in a league like this, and was thrilled that he was available at Pick 50. He is a legitimate threat to hit .300 with 30 HR, 100 RBI throughout his prime, if he can just shake the nagging injuries that have plagued him a bit so far. But at this point in the draft, he doesn’t even need to do that to be a win for my team. [Other considerations: Alex Gordon, Adrian Gonzalez]

Cespedes is a potential stud, and for someone to get him in the third round was surprising. I had him pegged to go in the top-30, and was on the short list for my second round pick. I’m a believer in the Hosmer come back, but surprisingly, not too many owners in this league seemed to be. And to go more than 20 picks after Manny Machado? They should be taken much closer together than that. Aroldis Chapman and Brandon Morrow are two pitchers I personally like, but they are not the type of pitchers you take in the third round of a dynasty league draft. Here are the pitchers they both went before: Matt Moore, Chris Sale, Max Scherzer, CC Sabathia and Adam Wainwright. It’s tough to make an argument for either one of them over a pitcher in that group (unless you’ve traveled back in time from the day that Chris Sale’s arm finally falls off). 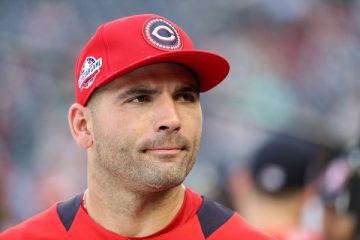